On our shelves sits an original edition of Orlando (The Marmalade Cat) His Silver Wedding, and the illustrations in this Artlog post are from that book. I’ve posted them at a high resolution so that you can click on them to better appreciate the artist’s masterful technique of drawing on textured lithographic plates. (The cover images in the post are borrowed from other sources, and as such are at a low resolution.) There is a granular quality to the work typical of lithography, and Hale’s wonderful gradations of intense yet broken colour against the white paper, create an almost hallucinogenic effect throughout her books that were produced by this means.

“Very soon Orlando began to long for a satin sofa to sleep upon, or a bed of hyacinths, a bower of ferns, the airing-cupboard, a pile of clean linen or even the hard pavement beneath him. He yawned, tripped over his whiskers and lay down, fast asleep.” 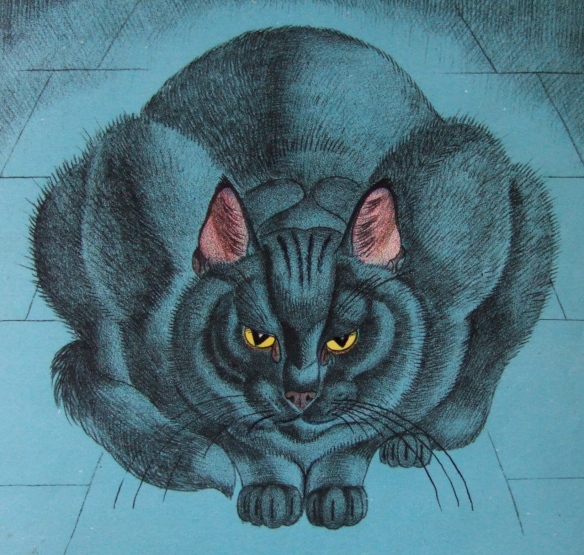 “I’m your wicked Uncle Truffle” he growled. “Maybe your parents have mentioned my name!”

Grace and Orlando dance at their Silver Wedding Anniversary party. She wears a dress stitched together from shrimp husks and fish skin (a plaice if I’m not mistaken) topped by a butter-muslin veil held in place with a tiara of trout bones. Later, to save waste, they boil the entire ensemble to make a tasty soup!

Orlando was wide awake by the time they reached home. He threw off the disguise and gave the doll to Grace. “That is the wedding dress I promised you.” he said proudly.

This double-page spread is a triumph. Be sure to click on it to see the detail. At their party Grace and Orlando receive their guests from the stage of a toy theatre. In the bottom right corner is a table with a label bearing the legend ‘Put presents here, please’. Among the gifts are a boxed-set of fish knives and forks, a pair of Staffordshire ‘Highland’ figures re-imagined as cats, and a pair of mouse-traps! Hale excelled at filling out the reader’s experience with such delightful discoveries.

Kathleen Hale wrote and illustrated nineteen Orlando (The Marmalade Cat) books that were published between 1938 and 1972. She claimed in an interview toward the end of her life that her husband Douglas, a medical researcher, had been the model for Orlando.

She had a colourful life that included a spell working for Duncan Grant and Vanessa Bell, and she spent sixteen months as Augustus John’s secretary. She admitted to letting John seduce her ‘out of curiosity’. After her marriage she also had an affair with Arthur Lett-Haines, the long-time lover of the painter Cedric Morris. (Morris and Lett-Haines founded the East Anglian School of Painting and Drawing at Dedham.)

Hale affectionately caricatured Lett-Haines as the ‘Katnapper’ in the 1944 Orlando (The Marmalade Cat) His Silver Wedding. (See above.)

So popular were the books that in 1951 a ballet, Orlando’s Silver Wedding, for which Hale designed the sets and costumes, was commissioned to celebrate The Festival of Britain.

While Hale undoubtedly enjoyed the celebrity the marmalade cat brought to her (she was awarded an OBE in 1976) she felt that Orlando had rather hijacked her career as a painter. The self-deprecating title of her autobiography A Slender Reputation, came from a remark by Cedric Morris that Hale had slung her “slender reputation on the broad shoulders of a eunuch cat.” But though Hale may have made light of her life’s work, even claiming, perhaps to shock, that she had grown to ‘hate’ Orlando.

The books are written with affection and wit, and the illustrations, beautifully reproduced by the publishers, are works of the greatest artistry. Hale had a genius for capturing the heft and stretch of her feline cast. Just look at the cover illustration below for Orlando’s Evening Out. Did ever an artist better capture the grace and character of a cat in a drawing? I think not. Hale was the real thing. Seek out her books and treasure them.

After Hale’s death, Margaret Drabble wrote of her:

‘Kathleen Hale, in her life, played the brave and dangerous game of trying to balance Reason and Moderation with Magic and Excess. She succeeded triumphantly, and her work glows with the excitement and exhilaration of the challenges she set herself.’

If you’re interested in finding out more about lithography and how it’s done, you can read a short but informative essay by Gaye Smith HERE. It includes references to Kathleen Hale and her working methods.

19 thoughts on “kathleen and orlando”