… this time at the Mother Goose Theatre, ready to be cut out and constructed and complete with a character sheet containing Mary Mary, Tom the piper’s son, Bobby Shaftoe, Miss Muffet, Baby Bunting and a rather voluptuous Bo Peep!

The three A4 printed sheets came with separate instructions, though even with those to guide construction it took considerable making-skills to get everything operating smoothly. I only sent the theatre in sheet form to those I thought would have the talents to construct it, and to all the others I sent the model already made up! 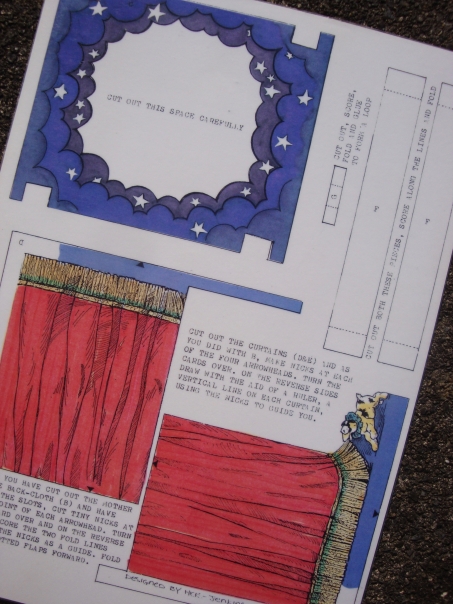 When correctly assembled the toy theatre folded flat into and could be posted in an envelope. However, when tabs either side of the stage were pulled, the curtains parted and a little dog appeared from behind them to chase across the footlights as the scene behind popped into three dimensions. Mother Goose was revealed mounted side-saddle on her bird flying through a starry night sky. The other characters could be set up on or around the stage. It was a pretty enough thing, though my telephone never stopped ringing with all recipients running into trouble while trying to construct it and needing further instruction.

11 thoughts on “another night of theatre…”