My set model for the production.

When preparing the Theatr Clwyd production of Little Shop of Horrors, my starting point was imagery drawn from histories of film design and German Expressionism. Everything was rendered in chiaroscuro to imitate a black and white film. I wanted a staircase to feature prominently, something steeply-pitched and dangerous to set the appropriate psychological tone. (Staircases in Expressionist films are invariably places of transition, often leading from dangerous spaces to positively lethal ones.) Mushnik’s run-down New York florist shop became one of those commercial premises set below sidewalk level. The large, greasy window looked out into a narrow light-well/litter-trap, hemmed by a high brick wall at the top of which the feet of passing pedestrians could be seen hurrying about their business. The descent from the door to the shop was through a skewed passage, and I had the staircase constructed so steeply that the actors had to negotiate it with great care, adding to the palpable sense of unease.

The set under construction on stage at Theatr Clwyd.

The black and white tiled shop floor too was very steeply raked. In fact such was its pitch that the first day the actors rehearsed on it, they were all too clearly hanging on to the bolted-down furniture for dear life, fearful of slipping and rolling into the orchestra pit. At the centre front was a sinister hole, the entrance to the flower-shop cellar out of which Seymour the down-trodden shop assistant first emerges. It was designed to mimic the way water spirals down a sink-hole, and the tiles were painted as though stretched and distorted by the vortex. Furniture was trundled into place on visible, heavy iron rails leading from tunnels in the brickwork, facilitating fast scene transitions and lending a subterranean, industrialised quality to the environment. This was emphasised by a really wonderfully imaginative, almost subliminal and continuous soundtrack to the production. A bleak orchestration of machinery, the bass rumble of passing subway trains and the sharp, distant punctuation of clanging, unceasingly underlining the isolation of Audrey and Seymour in the shabby basement. Not even the flowers that stocked Mushnik’s shop brought any relief, all of them looking undernourished and wilted. 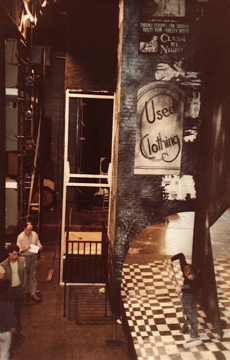 One of the tunnels under construction on stage. The rails have yet to be laid.

At the front of the stage high brick tenements framed the action, the fire-escapes and balconies creating multiple levels for the trio of street-smart girls who provide the Greek-chorus/Tamla Motown sung-narrative to Little Shop of Horrors. Peeling posters of my favourite noir movies were pasted high on the slimy brick walls. Behind this ‘exterior’ strip, an off-kilter aperture framed the shop interior, the crazy-angles conjuring an Expressionist world. Into this dropped asymmetric screens, one of them a ‘showcloth’ painted with iconic film references: Boris Karloff as the monster in Frankenstein, the female robot from Metropolis and the long-nailed vampire of Nosferatu. 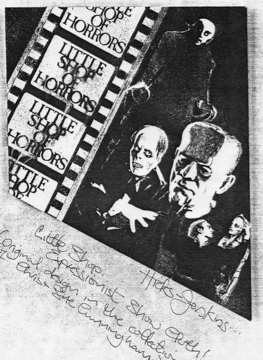 Design for the asymmetric ‘showcloth’. 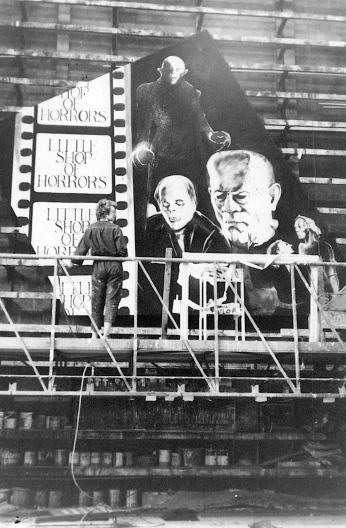 The showcloth takes form in the paint workshop.

Another depicted a brutally overwhelming skyscraper looming over the stage, perforated with hundreds of windows that could be lit from behind to conjure the night-time cityscape.

With Little Shop we managed to create a great deal out of a modest budget. Much was achieved thanks to the fantastic workshops and the great staff at Theatr Clwyd. Once the set model had been shown to the technical team, everybody pulled like dray-horses to make the show work. Everything was done with commitment and pride in achievement.

In the next post I’ll write about the design evolution and construction of Little Shop’s subterranean carnivorous plant, Audrey II!