Hansel & Gretel is my first picture-book, Given that I’m sixty-four, there has to be some likelihood that it’ll be my first and last, and so there’s a great deal tied up in it for me. It’s something I have to get right, because for as long as I can remember I’ve wanted to make a book with the story told in pictures, though I never seriously thought it would happen. Before even the change of career that took me from the stage to the studio aged forty, I’d fantasised about making picture-books, so this is a long-held dream made reality.

Becoming a painter was the biggest surprise to me at the time it began to happen. I’d thought that with luck and a following wind I might become good enough to be able to put brush to canvas without embarrassing myself too much, but I never once thought that things would go the way they did, until I found myself regularly exhibiting and selling. Eventually I realised that my career was shaping in a way that meant I was becoming a ‘gallery’ artist, and that a future of regular exhibitions was going to be the way I made my living. But I never lost my love of illustration, and from time to time I pondered on whether working as a painter might offer opportunities to explore the possibilities of making books.

Below: an Old Stile Press image I made for The Sonnets of Richard Barnfield

The first books I produced images for came as a result of an invitation from Nicolas and Frances McDowall at The Old Stile Press. The McDowalls make limited edition hand-printed and hand-bound books, collaborating closely with artists and printmakers. At the time I started working with Nicolas, I was not a printmaker (I  was barely established as an artist) and so it was a great leap of faith on Nicolas’ and Frances’ part to invite me to work with them. Moreover they understood me as a painter, because almost from the beginning of my career as an artist, they had collected my work. As I see it my apprenticeship in book-making was thanks to them, and to date I’ve made a number of books for the Old Stile Press, the last of which was the illustrated edition of Peter Shaffer’s play Equus.

Below: Frontispiece image of Equus 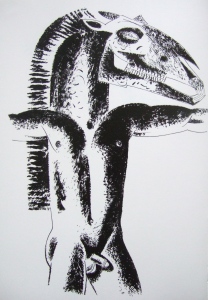 It’s a matter of great pride to me that I illustrated the covers of the two volumes of The Old Stile Press Bibliography.

I remember once telling my partner Peter that I’d really feel like a painter when someone came along and put a work of mine on the cover of a book. Oddly enough, when that happened and an ink drawing I’d made of a Mari Lwyd on paper was put onto a paperback volume of poetry, the result was disappointing. The image was reversed, the colour was digitally stained so that it looked as though it had been pinned to the wall of a room where people had smoked for forty years, and the title and author letterings were lamentable.

In time I began to see that though reproductions of paintings on book covers could occasionally work, they too often didn’t. More often than I was comfortable with, the reproduction, the cropping and the design and lettering let the whole thing down. Having your work on the cover of a book, I learned, is only satisfying when the design is beautifully executed. Sometimes that happened, as when Anita Mills designed the cover of a book for the Carolina Wren Press that featured a painting of mine, and she did it so beautifully that I loved the result. For the front cover of Yvonne C. Murphy’s volume of poetry, Aviaries, for the Carolina Wren Press, Anita cropped the image to a detail, but then added a smaller illustration of the full painting on the back of the book, which I thought worked wonderfully. 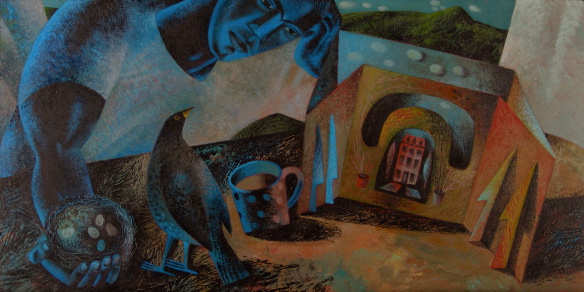 When time allowed and opportunities came my way, I began to make book cover images for some of my friends, the chief  among them being Marly Youmans, who because of her reputation as a writer was able to persuade one of her publishers to employ me. For The Foliate Head she even persuaded the publisher to take on my brother-in-law, Andrew Wakelin, as the designer, and he produced a splendid book-cover and ensured the layout inside was handsome. It was The Foliate Head that also established my regular practice of making page-division images and vignettes for Marly’s books. 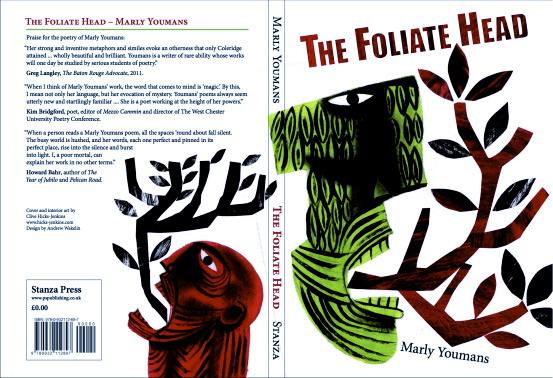 Above: cover of The Foliate Head, and below, vignette for the book.

Marly’s books at Mercer University Press are designed by Mary-Frances Glover-Burt. I trust Mary-Frances. We regularly work together and she is a rock.

These days, while I wouldn’t lay claim to being an illustrator, I balance my ‘easel’ work with graphic projects that interest me. I continue to make book covers for Marly, and I make covers, too for Damian Walford Davies, at the Welsh publishing house of Seren.

For Seren I also recently produced a cover for Mary-Ann Constantine’s forthcoming novel, Star-Shot, together with vignette drawings for the interior. 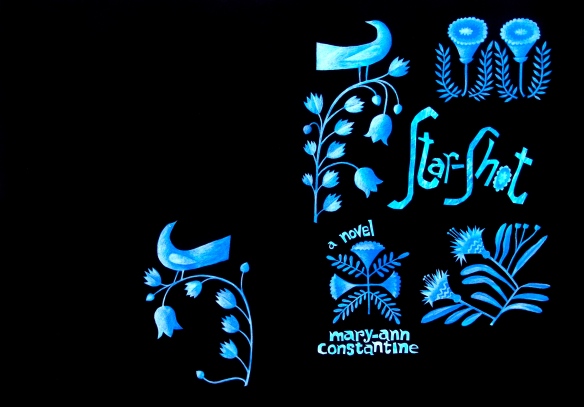 After having produced some Hansel & Gretel images for Simon Lewin’s second edition of his fund-raising-for-charity periodical, Random Spectacular, he suggested that we work together on expanding the collaboration into a full-blown ‘picture-book’. 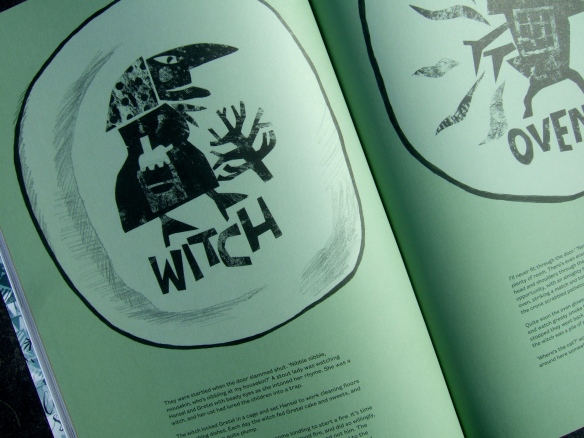 This is a dream project for me. It’s been a long time coming, and I’m going about it with a huge amount of pleasure. It’s interesting that at the same time I’ve been preparing H & G, I’ve been forging a friendship and partnership with printmaker Daniel Bugg of the Penfold Press, producing with his help my first screen-print, Man Slain by a Tiger. I’m enjoying bringing my experience as an ‘easl’ artist to these new fields of making images for the medium of print.

16 thoughts on “From Painting to Printing: part one”