My studio at Ty Isaf in late 2009, with The Congregation of Birds nearing completion on the easel. 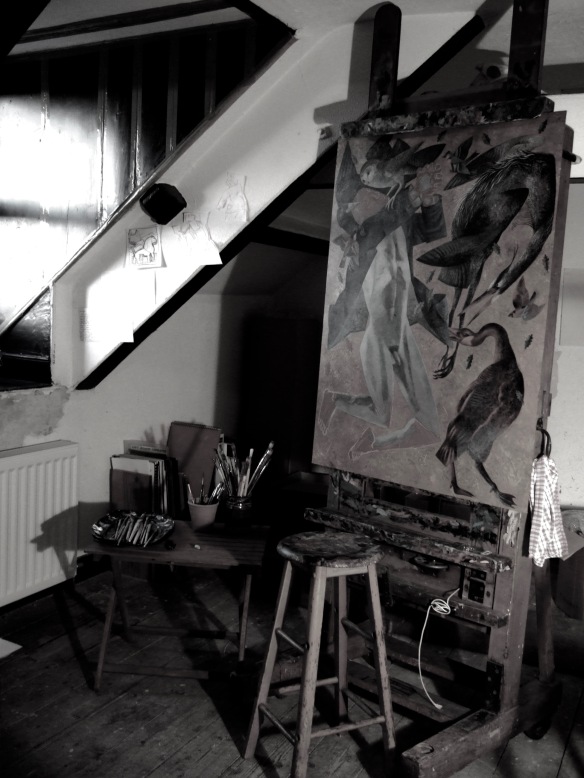 The Artlog has been running since Nov 2009. Six years is ancient in the blogging world, so I’m lucky to be still going. (I’ve wondered about concluding it on several occasions.) The idea for it was hatched when it became apparent during discussions about the publication of the Lund Humphries monograph about my work, due out in 2011, that I wasn’t comfortable at the prospect of having someone write about my past. Or more specifically, I wasn’t happy about the idea of having to describe my life to someone who would then have to decide what and what not to include. I was apprehensive at the prospect of making a list of dates and events that would have to represent me. I fought against it, and fretted and lost sleep. My partner Peter Wakelin and our friend Rex Harley… who went on to write the monograph chapters on ‘Still-Life’ and ‘Book Illustration’… persisted in asking who I would trust with the biography. We made lists. Still I fretted. There were things in my past I knew I’d have to examine, and I dreaded the process. (Who wouldn’t?)

Eventually Peter and Rex said that if I wouldn’t discharge the responsibility to anyone, then there was nothing for it but to write the damned thing myself. I rose to the bait, dropped so cleverly by them, and snapped  “I BLOODY WELL WILL WRITE IT, THEN!” And that, was that, spoken in haste and heartily regretted almost before the words were out! But I put up and shut up, not least because it was a relief to have the two of them finally go quiet on the subject, and I stomped off for long walks with the dog, simmering with resentment at having been cornered into something I didn’t want to do.

I made a list of autobiographies I most admired. There was only one artist on that list, and moreover his books were not so much biographies, as out-of-sequence recollections threaded through his descriptions of making art and films. It was Derek Jarman.

I’d always loved Jarman’s writing, loved his work and loved him. I’d admired his activism, his refusal to bow to those who disapproved, and his white-hot outbursts against the establishment. In a world where homosexuals were visible in the media only when they mocked themselves… we all know who they were, so I won’t list them here… Jarman was handsome, eloquent, outspoken and as angry as a mad hornet. It was an alluring mix, and about as sexy as anyone I’d laid eyes on. To a teenager coming to terms with what it meant to be homosexual when public opinion and the law were rampantly homophobic, Jarman was a shining light.

In terms of writing, I would look to him for inspiration. But it’s one thing to be inspired, and quite another to acquire the skills. Somewhere along the line, I had the idea of starting a blog where I could write on a regular basis in order to get better at expressing myself in words. On it I could describe my activities in the studio, and perhaps even beyond it. After all, art doesn’t begin and end at the easel. There are all those spaces between times spent in the studio, where the rest of life has to fit.

For a blog such as this, I’d seen no model. There was a year in which to get things moving, after which I’d need to be preparing the biographical chapter for the monograph, so there was no time to be lost. Diving in deep ends is something I’ve been doing all my life, learning on the hoof being my familiar way forward. I figured that few people would come to read the blog, and so when I made mistakes… and I’d almost certainly make a lot… then hardly anyone would know about them.

My worktable in the studio 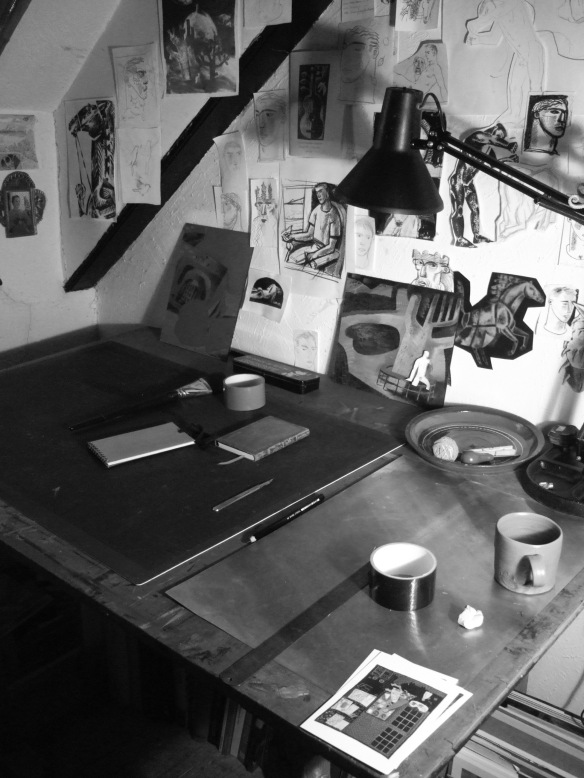 In Part 2, inviting the readers in.

19 thoughts on “The Spaces Between. Part 1: Getting Going”