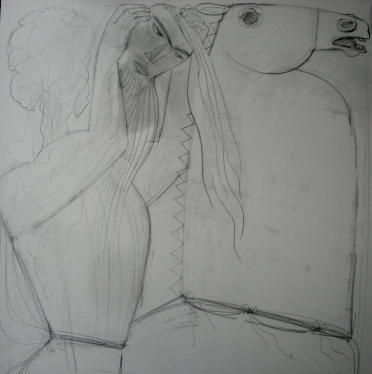 So here I am at the moment of the drama when the game changes, all the rules of the natural world broken. The blade has descended, flesh has parted and the head has rolled. But this giant of a man doesn’t lie down, even though separated from his seat of reason, and he strides off to retrieve it from where it’s rolled and rested. Arthur’s knights, unknightly-like, have kicked it for sport, making a football of the thing. Little wonder Camelot will one day fall.

The decapitated Green Knight, head in hands, turns to face the throng. Is the event to be shown from the front, or from the side, from a distance or in close-up? On horseback or off? More importantly, how is the severed head to be held? The territory is ripe for clichés. Somehow I must avoid them. Swinging the head by its hair is not an option, or it will look like every other scene in Game of Thrones.

I explore the alternatives. 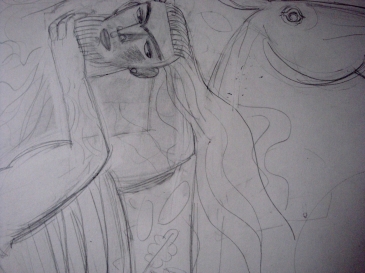 Having tried it all ways I resolve to show it grasped and held aloft in both hands, tilted to an angle with eyes sliding sideways from under half-closed lids while beard and hair stream and snap like pennants in the wind. But this is indoors, so is the wind a supernatural unsettling, or an earthly one, racing through a doorway left gaping after the Green Knight’s arrival? It doesn’t matter. We can’t see  anything of the space anyway. And there’s no wound for us to gawp at either, as I don’t want to distract with bleeding stumps. Nevertheless the head is off, no doubt about that, absent from where it should be and present where it should not, held high and cradled in strong hands.

There’s blood, or what passes for it with old magic at work. Dense with flow, not kinetic, but hieratic, spouting, fountaining frozen, blossoming atop a frilled column. This is blood unfurling, not gushing. My reference is a fungus I once found bursting through the black plastic of a neighbour’s bale of hay. It was huge. I broke away a grapefruit-sized part of it and brought it home to photograph and draw. I’ve lost the drawings, but a photograph of it survives, fluted like cathedral fan-vaulting and flowing in overlapping scallop-shapes. It will make a strangeness in the composition rendering the event not just supernatural, but beautiful. There’s beauty too in the horse’s embroidered caparison, which will swarm with foliate meanderings and flighty birds. 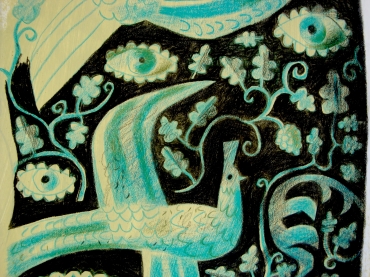 A significant element in the composition is the animal’s wildly rolling eye and fearful expression. The human observers are out of frame, and so it stands in for them in the matter of a response to what’s happening, its astonishment more meaningful than anything we might expect from those loutish, head-kicking bully-boys pissed on Christmas wine.

Above, reference photo of fungi, and below, beginning to create the embroidered patterning of the horse’s caparison. 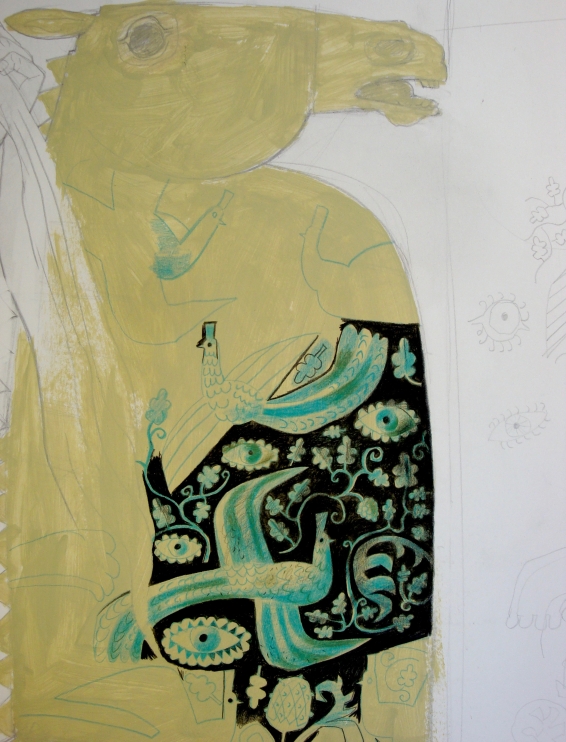 7 thoughts on ““blood unfurling, not gushing””