The past days have been a frenzy of activity. On Thursday my friend Phil Cooper arrived at Aberystwyth station with a knapsack, a taped-together makeshift portfolio and a mysterious suitcase. At Ty Isaf the portfolio yielded the painted backdrop of a night sky, while out of the suitcase spilled box after box packed with the models Phil had prepared for two days of filming the book-trailer we’re putting together in advance of the November launch of Hansel & Gretel, a picture-book commissioned from me by Simon Lewin for his Random Spectacular imprint. I finished the artwork earlier this year, and right now Simon is in the process of seeing the project through the design and printing processes.

Phil (pictured above) took my images for the book as his starting point for the models, but then extemporised and got playful with them. The idea was not so much to imitate the illustrations as to create a ‘constructed’ universe which might have been their source. In a way the book-trailer is in the mould of those opening credits for films wherein the mood is set for what follows. Saul Bass did it magnificently for Psycho and Anatomy of a Murder. Phil was given his head to make his own interpretation of my drawings, and he’s risen to the challenge with tremendous ingenuity. Experiencing them was a strange combination of the familiar and the oddly different. (The way dreams sometimes are.) 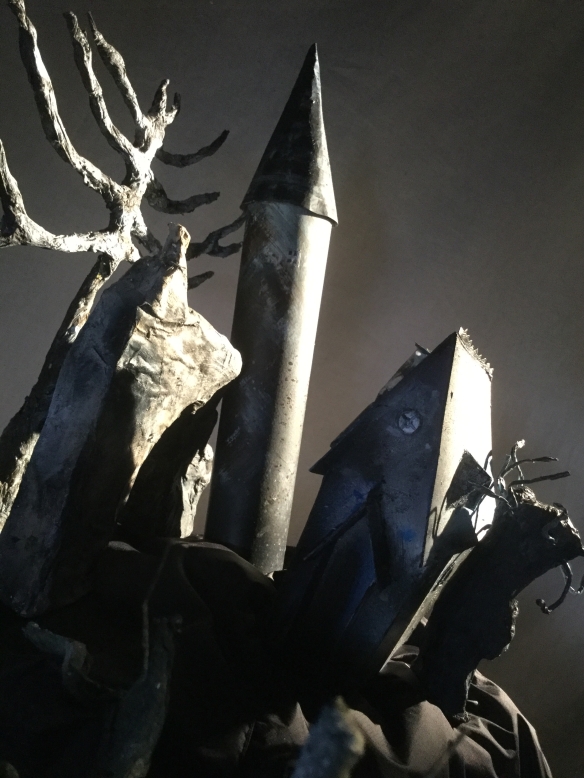 This is not the first time the dining-room at Ty Isaf has been turned into a pop-up animation studio. All of the animation footage for The Mare’s Tale, the 2013 chamber-work by composer Mark Bowden and librettist Damian Walford Davies, was filmed here, as was the animated presentation I made to accompany a performance of Stravinsky’s The Soldier’s Tale at the 2013 Hay Festival. Film-maker and cameraman Pete Telfer worked on those projects too. There’s an ease in the relationship between us that makes for good collaboration. 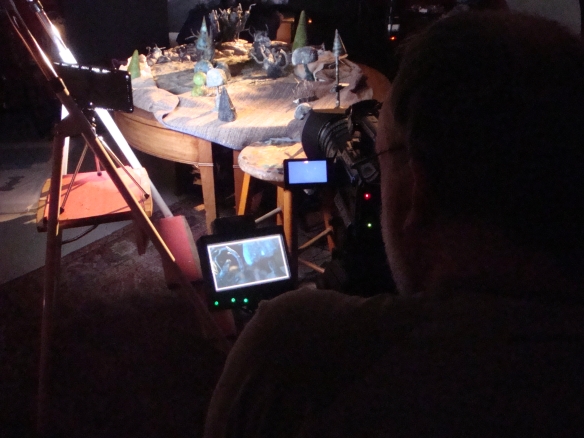 Above: I took this over Pete’s shoulder as he composed his shot in the viewfinder of his camera while I watched on the monitor. What’s on the table in front of us bears no resemblance to what you’ll see in the trailer. The chaotic is processed and rendered into magical order by the alchemy of lights and camera.

It takes a while to get the feel for models and how to light and shoot them. The first morning of work was hesitant as we arranged and rearranged the witch’s cottage hemmed in by trees, and everything was rather cautious and stilted. Like the first day of school! A couple of set-ups into the afternoon and the creativity was flowing freely, and by the evening we’d got some lovely shots into the can. 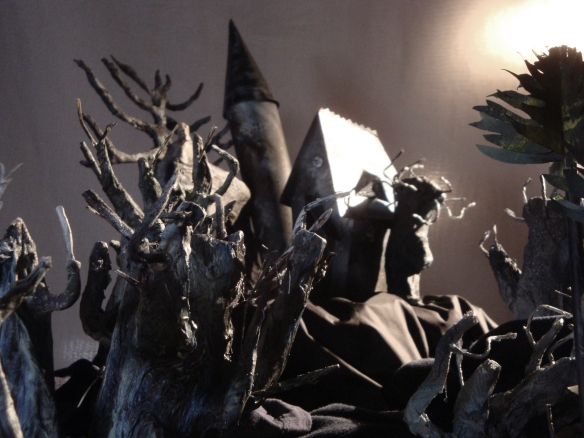 Saturday began early for me as I wanted to get a story-board ready before Pete arrived for the day’s work. Although I’d had a rough idea of what I wanted to achieve, it had taken the arrival of the models and seeing how they looked in front of the camera to clarify how best to proceed. By 10.30 am Pete was adjusting his lights and Phil and I were puppeteering boards and torches to create a restless nightscape of animated shadows. I always know Pete is in the zone when he begins to march up to a model and shift things around. When that starts to happen, we’re up and away.

In the afternoon we struck the forest set and began work on the makeshift animation-table I’ve used for all my film projects. (Animation-table is a grand word for a large sheet of rough plywood coated with blackboard paint.) The ‘text’ for the book-trailer was hand-written – and occasionally animated – in white crayon on a black ground, in ‘homage’ to the chalkboard title-sequence of my favourite film bar none, Jean Cocteau’s ravishing fairy-tale of 1946, La belle et la bête.

Hansel & Gretel are absent from the trailer, though another character makes a partial and unnerving appearance. But for that, you’ll have to wait! We edit on the 17th and the trailer will be available for viewing shortly thereafter. Look out for it.