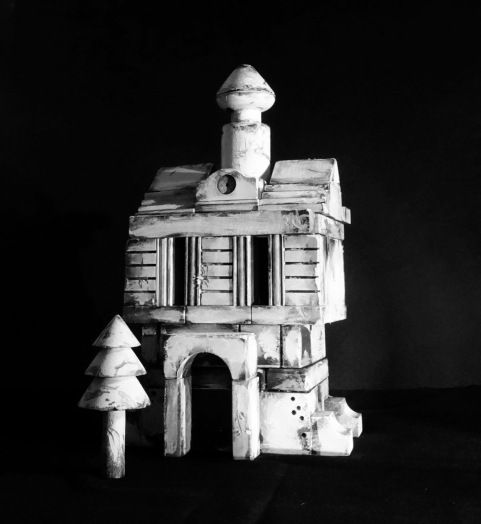 The Witch House in Hansel & Gretel is the work of my collaborator Phil Cooper, who came up with it when I asked him to construct all the models for the production from old wooden building blocks. Phil used blocks that I sent to him, and others he sourced from a Berlin vintage toy shop. There were several trial attempts at the house, but as soon as I saw this one I knew it was proof that the idea for all the Hansel & Gretel sets to appear as if made from the contents of the children’s toy-chest, could work.

Painting the blocks white loaned a more sinister, bone-like appearance. But what I like most about the finished Witch House – which is made in glued-together sections so that the children can demolish it – is that it has a dual character.

Above: Phil Cooper shares his ‘Witch House’ with the production team.

Its a dwelling you might find in a fairytale forest, the whiteness lending the quality of an old-fashioned sugar-loaf. But while there is undoubtedly a gemütlich quality, it also has that sinister tower/chimney which reminds me of an incinerator.

Later I asked Phil to make a set of Lebkuchen biscuits for an animation sequence, and all unasked for he came up with one that was a version of the Witch House, which we used to great effect in the ‘Dance of the Lebkuchen’.

In the production, images of the ‘Sugar House’ are interchangeable with the iced biscuit, as though the magic that holds the illusion together is unsteady. Now the Lebkuchen version of the Witch House is making its debut in the illustrated libretto, to be published later this year by Design for Today, and in a way I hadn’t at all imagined when I began the book. 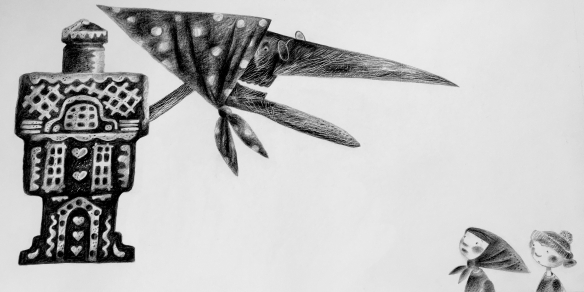 Making a stage production requires many hands and talents. Phil had to work within the parameters that I set for him in terms of the overall ‘feel’ of what I wanted to see on the stage, and the materials I asked him to work with, but was then able to stamp his own style and creativity on what he made. Now his work is filtering into my illustrations for the book, transforming yet again. What I’m producing simply wouldn’t have happened in the same way without that process of collaboration. It’s like a great game of tennis. 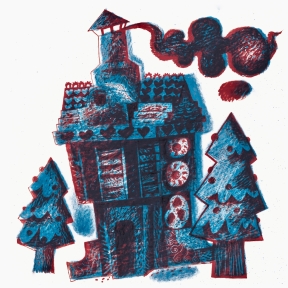 7 thoughts on “The Witch House”