It strikes me at this distance from Catriona Urquhart’s death – she left us in 2005 – that I should have been commemorating the date of her birth these past fourteen years, not the day she left us. However all those who knew and loved Catriona, are conscious of the significance of the date of her death, and so May 1st has become the default anniversary when I dedicate a post to her here. She had the warmest spot for May Day, and all the histories and mythologies knitted into it. Her life partner, Ian, and all her family, felt that she’d delayed her death to coincide with it. I don’t know what I feel about that. I’m still numb at the recollection of it.

Catriona first came upon me when I was lost, and thereafter quietly set about rescuing one who she perceived to be struggling. I thought it strange that I’d attracted a new friend, and couldn’t for the life of me figure out why she’d taken up with me. Of course I know now that she’d noticed how unravelled I was – and how free-falling – and she’d just reached out and caught at the broken tethers trailing in my wake, halting my drift. Emotionally anaesthetised, I was barely aware of what was happening. She wasn’t at all intrusive, but she kept a very close eye on me. I can see now it was an extraordinary thing to do, but she was a woman of heightened intuition, and saw things that others missed. The long story must be one for another time, but for today I wanted to remember and tell how she lightly caught and then strongly held me, and halted what I’m sure would otherwise have resulted in a bad outcome.

In time I recovered myself and healed, and we two became mutually supportive friends, our relationship evolving. We embraced others, though we were always most ourselves when alone together. I met Peter, and he and I and Catriona and Ian became friends as a group. She and I encouraged each other in enthusiasms and growing ambitions. We became collaborators on a series of work that would change my creative trajectory, and resulted in the publication by the Old Stile Press of her elegiac poetry cycle based on my father’s life, The Mare’s Tale. We were sometimes impossible together, exasperating others, and especially our partners. We snuck off on adventures that we kept secret. We relished a mutual appreciation of odd things others thought plain silly. Catriona could be sharp as needles and witheringly intolerant of what she saw as self-aggrandisement and puff, and she could make me fall over with laughter when she turned her wrath where she thought it most deserving. But she was also full of goodness, and had a radar for spotting an aching psyche that needed the balm of nurture.

During bad moments, I still ran for her company like a lost puppy. In the early days of my relationship with Peter, I walked out on him, though when he found I was gone, he knew well enough where to come looking for me. I was sleeping like the dead at Catriona’s, exhausted from a volcanic outpouring of rage and desolation. Awaking to find him sitting on the bed next to me, one hand on my shoulder, the other offering a cup of tea, it turned out she’d explained things to him as I’d been unable to, and all was forgiven and restored.

I miss her as sharply as I did on the day she died. These things don’t go away. We just learn better how to accommodate them.

Long, long ago, Catriona gave me a sapling walnut tree. It was about fifteen inches high, barely more than a stick in a pot. For about seven years it languished, clearly unhappy in the pot, but our city garden was too small to take what might grow into a large specimen. When we moved to Ty Isaf, it came with us, and was finally liberated into open ground. And a pretty diminished thing it looked at the time, after its long captivity, and moreover with its tap-root rotted away, we discovered, because the pot was not well drained.

Twelve years on it’s twenty feet high and in rude health. Every summer it puts out a spectacular canopy. I see it plainly from all the front-facing windows of the house, pass it whenever I walk in the garden,  follow the progress of its fruits, sit under its shade in high summer and read. It’s where I go to talk to Catriona. 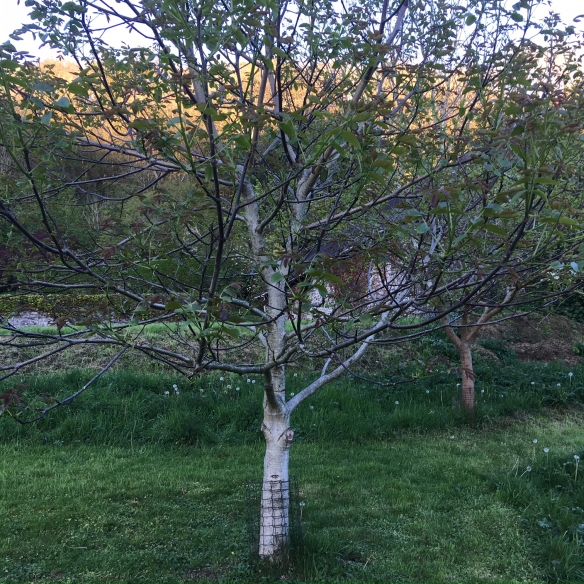