Yesterday I talked to the students at Hereford College of Arts about my work making a book in ‘homage’ to Jean Cocteau’s film, La Belle et la Bête, a dream project I’m collaborating on with my friend Joe Pearson at Design for Today. 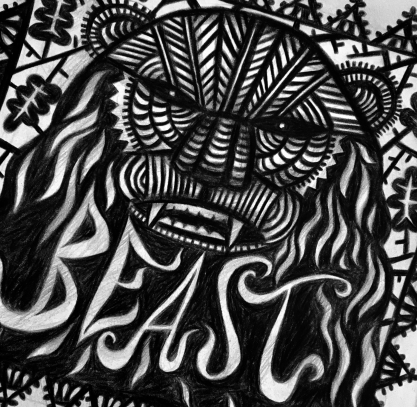 I can quite see that it’s a strange notion to attempt a picture book about another artist’s creation originally made in the form of a film. There are many visual reinventions that are required in order to successfully carry off the trick, especially as my intention has never been to make a scene-by-scene ‘copy’ of the film. I think of what I’m producing as a translation. I’m working to translate, rather than reproduce the actors’ iconic screen appearances into what will work in illustration terms, and the same process is being undertaken with the film’s studio sets and the locations. The canvas, plaster and gauze spaces of the Beast’s chambers, passageways and balconies that the actors performed on, are opening up in my imagination as I transport myself into their world, just as Cocteau described the experience of walking through the constructed rooms in his published Diary of a Film.

Cocteau on the set for Beauty’s bedroom, Saturday the 15th December 1945:

“I’ve never seen a set either in the theatre or in films to appeal as much to me as this one of Beauty’s room where I am working now. The studio hands like it too. Even the waitresses from the restaurant come and see it and are thrilled to pieces.

I’d like to hear this room described by Edgar Allen Poe; for it is, as it were, isolated in space with the remnants of the forest set on one side, and the beginnings of the stream set on the other. With the result that bushes can be seen through its walls of net, suggesting a whole incomprehensible landscape behind it. Its carpet is of grass and its furniture in the magnificent bad taste of Gustave Doré.” 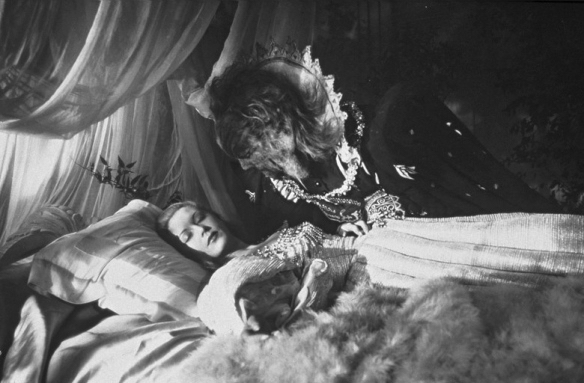 I’m working in colour, which Cocteau wanted to do but was unable to afford in those harsh, post-war days when the French film industry was on its knees in the wake of the Occupation. He describes in his diary the sky blue of Belle’s sumptuous satin gown, worn by Josette Day in the farm garden when Belle returns home, and how beautiful the colour was against the white bed-sheets hanging out to dry, with the black hens scattering in front of her. 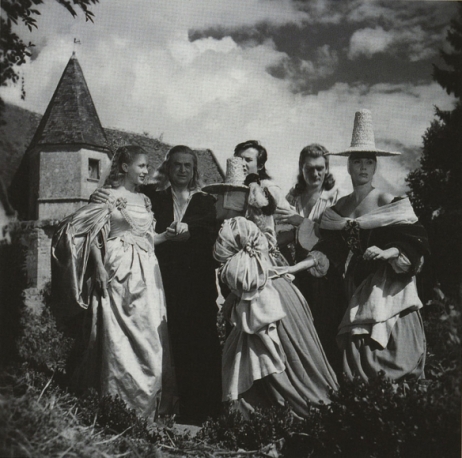 Above: the cast on location at Moulin de Touvois á Rochecorbon in Touraine, the small ‘manor’ that Cocteau chose  for the exteriors of Beauty’s home. From left to right, Josette Day, Marcel André, Nane Germon, Michel Auclair, Jean Marais and Mila Parely.

The fact is that there have been echoes of La Belle et la Bête in much of my work of the last decade. Leonine creatures have appeared in many of my works, and always in them the combination of rage, anguish and yearning that hallmark Jean Marais’ performance as la Bête. 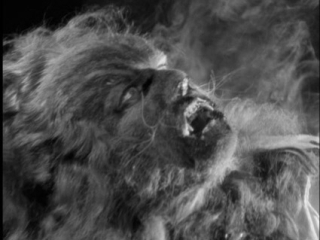 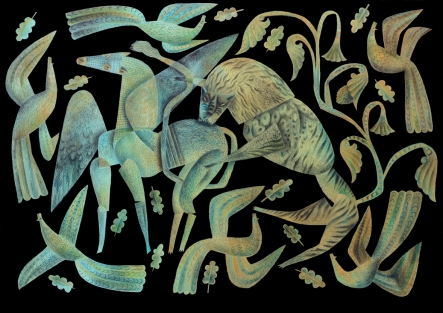 In the first of a new series of prints titled New Folktales that I’m making with Dan Bugg at Penfold Press, the recurring themes of beauty and beastliness are apparent in both the title and the image of The Tiger’s Bride.

Above: preparatory drawing for The Tiger’s Bride.

And even in my recent cover for These Our Monsters I can see that I’m toying with ideas for the Beast’s garden, setting serpentine stems and muted, nighttime colours against a velvety black.

Josette Day and Jean Marais haunt me at the drawing-board and in my dreams. I make and unmake them over and over as I strive to capture an essence of their stateliness and beauty. 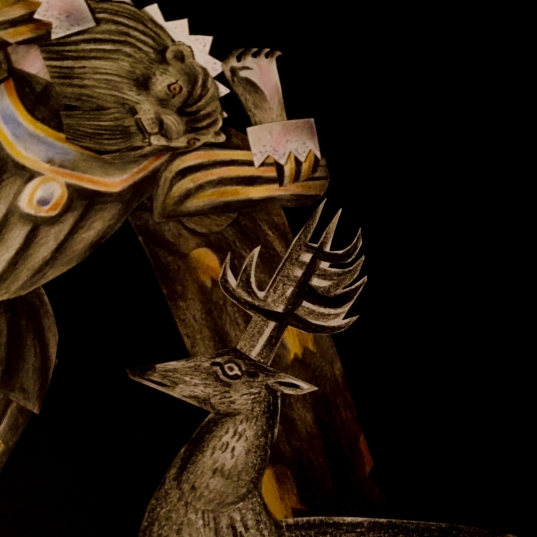 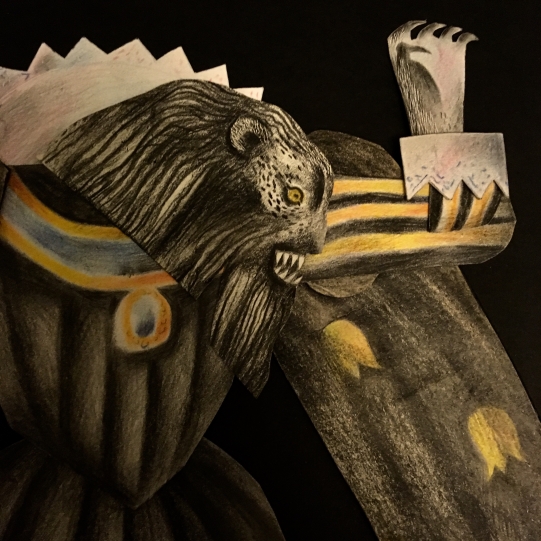 Above: maquettes made preparatory to illustrating the book.

I see the book as being like a bottle of perfume that you unstopper in order to inhale something rich and dark. It’s a fight, but every time I make a small progress, it feels like triumph.