I’m Welsh by birth though I moved to London in my early teens to study stagecraft at the Italia Conti School. Through the school agency I began working professionally, juggling academic lessons, dance classes, rehearsals and filming. After leaving the school I continued for a while as a dancer and actor, but quite early on began to establish myself as a choreographer. Later came opportunities to direct and for a few years I also stage designed, occasionally practising the three disciplines simultaneously. Performance skills gained early on in puppetry, masks and all forms of stage trickery proved useful tools for me to create productions strong on visual impact. I worked in the UK, across Europe and in the USA. But by the time I could confidently look at my diary at any time and see that there was plenty of work booked ahead, I’d also become uneasy about the peripatetic life that went with the job. I was weary too of the collaborative demands of theatre, which is essentially a team game. After twenty-three years of professional work on the stage I simply stopped accepting offers. I was thirty-seven. 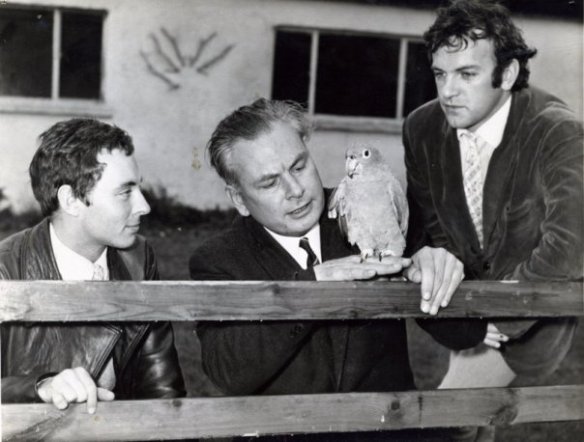 Me aged nineteen, about to appear as Jim Hawkins opposite the Long John Silver of Michael David (centre) in a 1970 production of Treasure Island directed by Roger Nott. (right)

I came very late to painting. Past forty. But I wouldn’t have come to it at all were it not for the fact that I met Peter Wakelin who took an interest in my drawing and encouraged me to paint. (Significantly we’d met at an art fair that I’d been taken to by an old school friend, Robin Hawkins.) In time Peter and I became partners. He steadily inched things forward and made over a box-room in his Cardiff house to serve as a small studio for me. However he didn’t stop at that. One day he ‘cold-called’ at The Kilvert Gallery in Clyro, persuading the owner Lizzie Organ to look at my portfolio while I stood by, my face flaming with embarrassment. Lizzie was unexpectedly forgiving and enthusiastic and after a short spell where my work had a presence in mixed shows at her gallery, she offered me my first one-man exhibition, a giant leap of faith on her part. The work was well received and the exhibition sold extremely well. I’d hit the ground running.

In my early years of painting I had virtually no confidence in myself, expecting at all times to be exposed as a fraud. Nevertheless supported by Peter… the ‘engine’ driving me forward… I kept my head down and taught myself how to handle pigment and brushes. His belief had to make up for my own insecurities and deficiencies. He never stopped saying “You are a painter”. I’m not sure that I felt like one, but his belief kept me afloat. As in dance, I hoped that if I stuck at painting the whole business would one day make sense to me.  Eventually, after a few years it did. One day the penny dropped. I’d been a choreographer with a strong inclination toward narrative. Now that same instinct to tell stories fired me up at the easel. The landscapes and still-life works I’d cut my teeth on became incorporated into a different kind of work entirely as I evolved into a painter preoccupied not so much by what the paintings were of, but with what they would actually mean.  The Martin Tinney Gallery in Cardiff began to show my work in mixed shows. As at the Kilvert, in time I graduated to solo exhibitions. I remain with Martin to this day. When Lizzie Organ died, Peter wrote her obituary for the Guardian newspaper. The packed church at her funeral in Clyro was a testament to how well she was loved.

In dance terms we talk about ‘muscle memory’. This is the process by which a gruelling schedule of training and rehearsal become so much a part of the dancer’s body that the technique and the steps barely require conscious thought, freeing the mind to fully give itself up to the performance. Painting, I’ve found, is exactly like that. At this distance from my first career I can see now that I gave up one form of rehearsal only to adopt another. I simply relinquished the performance as the mode of expression to replace it with the exhibition. Some things in life really don’t change. I even have ‘Opening Nights’!

31 thoughts on “about: how it all happened”