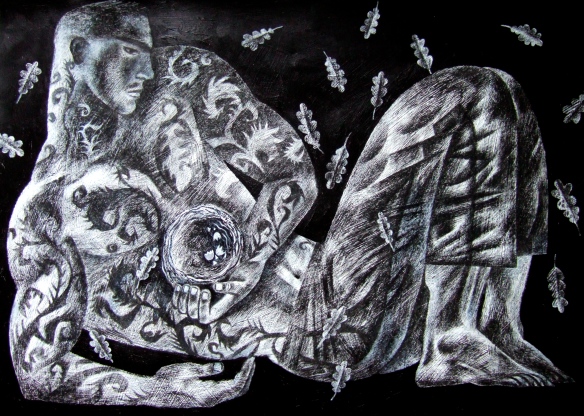 The sketch from which the drawing started.

All the works from this ‘Saints’ series shown over the past few months on the Artlog, will be offered at my next Martin Tinney Gallery exhibition.

An interrupted day, and so not quite done yet. The nest and the saint’s left hand are to be completed tomorrow. But for those of you keen to see how things have progressed, here is a detail of the area I’ve been working on. If you compare this with the image I posted yesterday, you’ll see that the tonalities of the face have been adjusted and the tattoos tinkered with until I was satisfied. A few extra oak leaves have floated down too. More tomorrow. 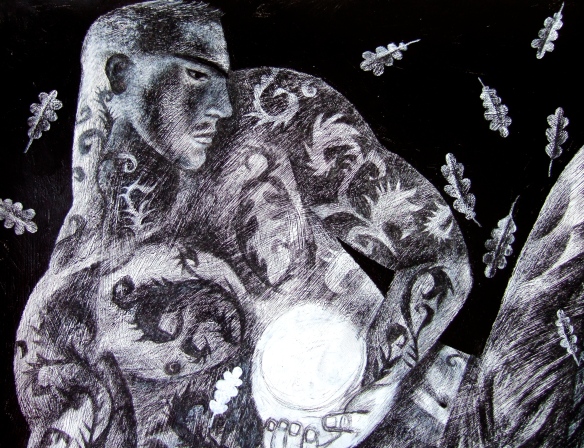 Philippa’s photograph of the mechanical digger (see last post) has switched a light on in my head, and one of the results is that the title of the Kevin and the Blackbird drawing currently in progress has now been changed from Empty Nest to Held. This afternoon I had a good session that saw work on the saint’s tattooed torso move forward significantly, and with luck I may well complete the drawing tomorrow. Here’s how it was looking at close of business today. 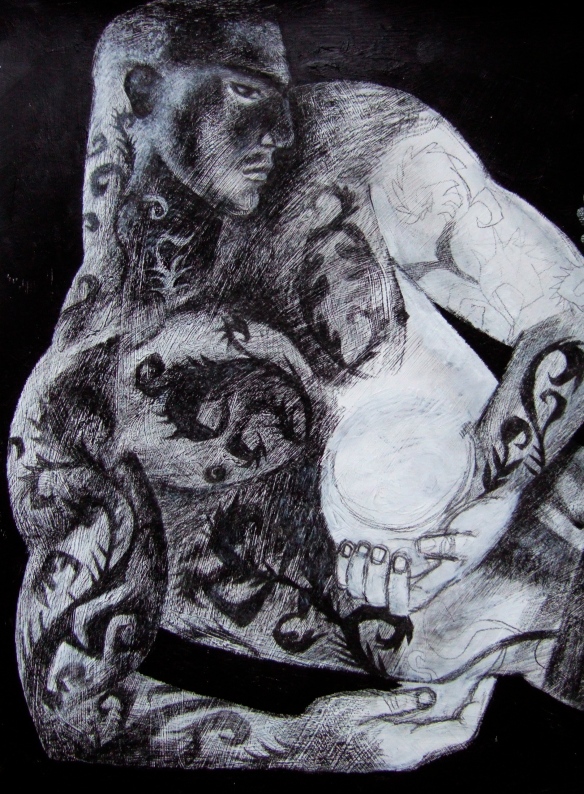 The saint’s tattoos in this drawing are quite unlike the lanceolate leaves and softly flowing tendrils of the last one, in which there was a graceful aspect to the inked pattern. Now the saint’s body seems a war-zone of aggressively thorny growth, as though he’s marked not by benign nature, but a natural world full of pain and chaos.

Sometimes a drawing or painting just has to find its own way, and so it is with this one. In 2009 in the first work of the series, I painted Kevin as a man almost crucified by the agonising task of supporting the bird’s nest, his thrust-out arm visibly straining with the effort. In the later works I eschewed that approach, and instead the saint cradled the nest in table-top still-life landscapes-in-miniature. Now the ideas have further evolved, and Kevin once again is showing signs both of mental strain and the privations of the hermit’s life. Nature is ultimately cruel, and in protecting the nest and its occupants from the worst of it, perhaps the saint has absorbed everything that scratches and strangles, taking the blows for the blackbird and her tender young while they are at their most vulnerable.

While out and about with her camera, my friend Philippa Robbins caught sight of something that reminded her of me. A thousand people would have walked past and not made the connection, but Philippa is a painter and her eye misses nothing. The detail beneath her photograph is from my painting Kevin and the Sunflowers. That should explain everything. 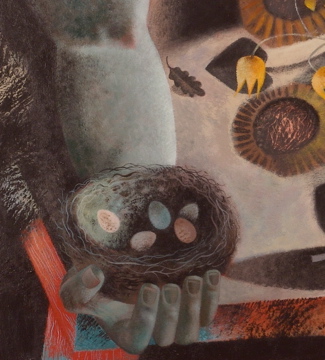 Thank you Philippa for taking the photograph and then sending it to me. I love the fact that you spotted the digger and immediately recognised that I would relish an image of it! By coincidence, here is the drawing (or rather a detail from it) that I’m currently working on! 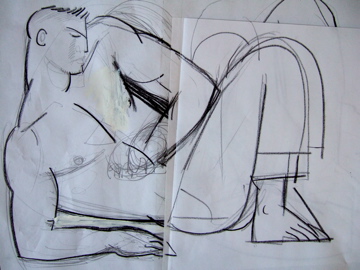 I posted this sketch of a new Saint Kevin drawing a week ago, and today I’ve started work in earnest on the full scale version, a detail of which I’ve posted below. I’m hoping that things will go a little faster now that I don’t have the distraction of so many house-guests here to see the exhibition. 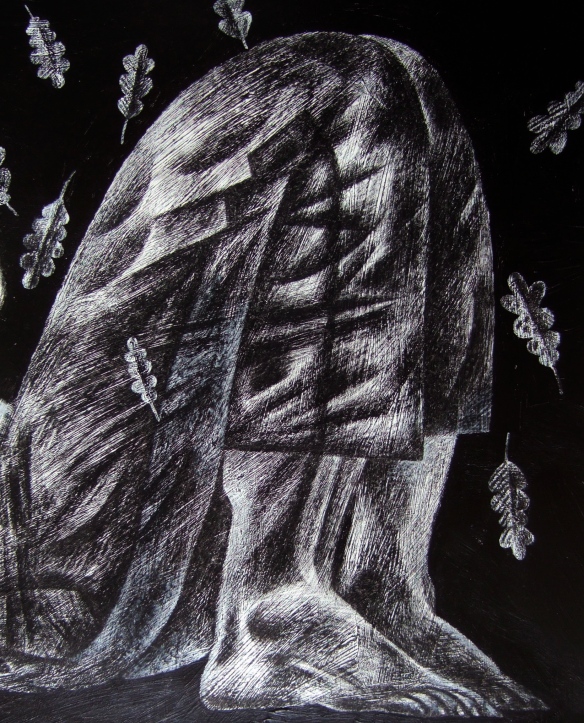 First sketches are often lively though rough. In this one the emphasis is on incomplete ellipses, the largest being the one  formed by the reclining saint’s thigh, knee and shin. The series of curves shaping his outline will be what I strive most to retain as the drawing progresses. I want the image to be schematic and pared down, making a simple frame for the silvery tonal values I plan for the tattooed chest, shoulders and arms. The finished drawing must capture a stillness and monumentality of form so that there is a contrast between the physicality of the man and the tenderness of the nest cupped in his palm.

I’ve already roughly re-drawn the sketch onto a sheet of acrylic-primed Arches paper measuring 56 x 76 cm, and tomorrow I’ll start working it up with Conté pencil. There will be adjustments of course… there always are… but I must try to hold on to what I think works in the original sketch. Watch this space.

Although these two drawings have already been posted separately, I wanted to put them together on the Artlog for the sake of seeing how they’d look in company with each other. They’re identical in size, media and technique, and are toward a planned series of chiaroscuro 60 x 60 cm drawings for my forthcoming  exhibition at the Martin Tinney Gallery, Cardiff. The main work of the show will be a very large Annunciation that’s taken inspiration from a new poem by Damian Walford Davies. This will be supported by preparatory studies for the painting, plus the present series of  drawings of saints Hervé, Kevin and Francis.

I’ve finished the first drawing of Kevin as a tattooed saint. For so long the substitute for a tree, he has almost become one by dint of will. A pattern of leaves stains his bare torso and arms. (One account has him standing naked in a stream when the miracle of the blackbird begins.)

The hen built her nest in the young man’s outstretched hand. I wonder whether he offered it in a spontaneous gesture of kinship, or proffered seed from his cupped palm to draw her closer. Whatever the reason she returned to weave her nest and lay her clutch, then stayed to keep the eggs warm until they hatched. There the family remained, safely lodged and watched over until the young had fledged. Now, with blackbird and young long flown, the saint remains, deep in sleep, dreaming of wings.

Flown (re-titled from Sleeping Saint) is nearly done.  I shall post the finished drawing tomorrow. Here’s a detail, the abandoned nest cradled in the saint’s yet-to-be-completed hand. The drawing measures 60 x 60 cms.

Many thanks to all of you who answered yesterday’s call by sending information about pernicious advertisements appearing on the Artlog. Your responses were a great help and I think that now I both better understand what’s going on and, with Dave Bonta’s kind help, I should be able to put an end to the matter. So, three cheers for all!

I’d already brought the drawing to this stage…

when Philippa Robbins e-mailed me this link to an image Paul Bommer had listed as being one of his ‘Flickr Favourites’. Extraordinary synchronicity.