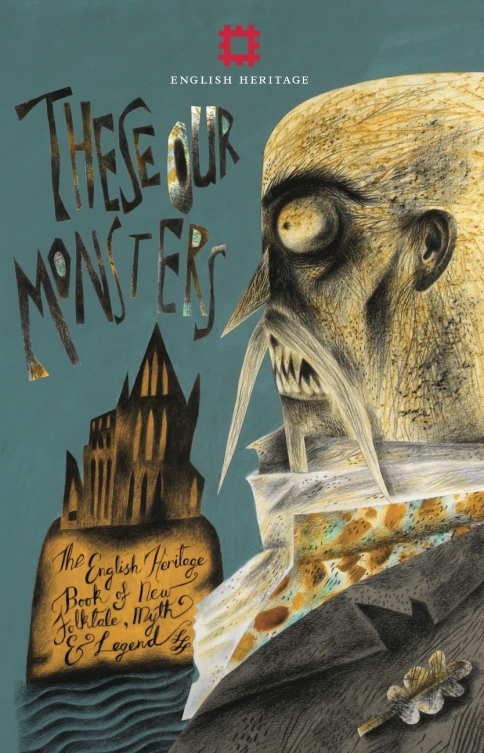 On the cover of the myths and legends-inspired short story anthology These Our Monsters just out from English Heritage, I depicted Dracula because both the undead Count and his creator, Irish author Bram Stoker, appear in Graeme Macrae Burnet’s The Dark Thread. Burnet’s brief Whitby-set conjuring of Dracula as imagined by his author sent me to my bookshelves to take a look at how the Count is described by Stoker in the 1897 novel. In films Dracula has been depicted as darkly handsome with a deadly allure and sensuality. But that’s simply not the way Stoker introduced him:

Below: the first ‘Dracula’ sketch in my These Our Monsters project-book 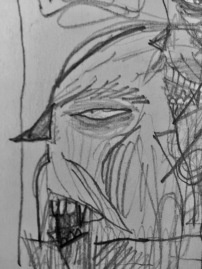 “His face was very strong, aquiline, with high bridge of the thin nose and peculiarly arched nostrils, with lofty domed forehead, and hair growing scantily round the temples but profusely elsewhere. His eyebrows were very massive, almost meeting over the nose, and with bushy hair that seemed to curl in its own profusion. The mouth, so far as I could see it under the heavy moustache, was fixed and rather cruel-looking, with peculiarly sharp white teeth.”

From Christopher Lee in the 1958 – 1973 Hammer franchise to Gary Oldman in Bram Stoker’s Dracula (Francis Ford Coppola, 1992) via Frank Langella reprising his Broadway success as the Count in a Dracula (John Badham, 1979) with a distinctly erotic charge, the ‘Prince of Vampire’s’ cinematic appearances have been constantly in flux, endlessly reinvented to suit the tastes of the age. But the bushy eyebrows and the mouth-obscuring moustache were left between the pages of the original novel, film-makers preferring the undead to be smooth-faced. (Gary Oldman sported a trim moustache and goatee with shoulder-length curls as he pursued Winona Ryder throughout much of Coppola’s film, more dreamy musketeer than vampire Count, so she understandably buckled at the knees when he swooped in for a lick!) 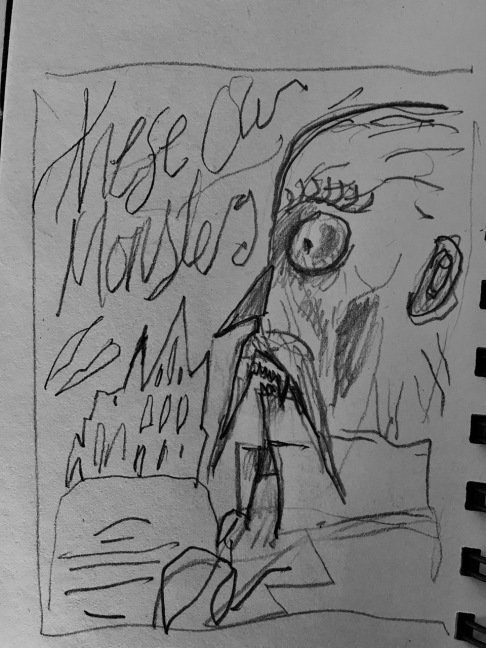 The changes wrought in translation are understandable. A film is not a book and an illustration doesn’t have to follow to the letter the text that underlies it. For my own Dracula I invented an ancient-parchment complexion, criss-crossed with lines. I ditched Stoker’s description of pointed ears (too Spock-like for a post-Star-Trek generation) but stuck with the straggly moustache because I liked the idea of the unholy trailing and dripping mess it would make when the vampire fed. I retained the unibrow, though replaced Stoker’s description of the Count’s sombre dark garments with the dandy’s delight in exuberant colour. My sartorial Dracula has a very fancy waistcoat!

Below: the cover art underway. Whitby Abbey is just an outline at this stage. 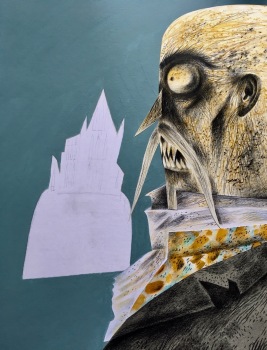 Stoker can’t have known and couldn’t possibly have imagined the popularity of his monster reinvented into a plethora of iterations, and that’s not including the Dracula-inspired inventions that go by other names in cinema and fiction, starting with director F. W. Murnau’s 1922 silent film Nosferatu which unwisely drew on the novel without acquiring permissions from the author’s widow. First she lobbied the producer with demands for compensation, but when it turned out there was no money to be had, gained a court order requiring that all the prints of the film be destroyed. Today there would be no Nosferatu had a few prints not slipped through the net.

The Count from Transylvania has stuck like a burr in the imaginations of creators and audiences. We can’t get enough of him. I loved honouring the tale on the cover of  These Our Monsters. I read not only Burnet’s story in order to make the cover, but Stoker’s novel too. (Twice.) I’d illustrate it in a heartbeat were the offer to come my way.

Below: my first version of the cover, with the lettering given more space and the EH logo placed bottom left. 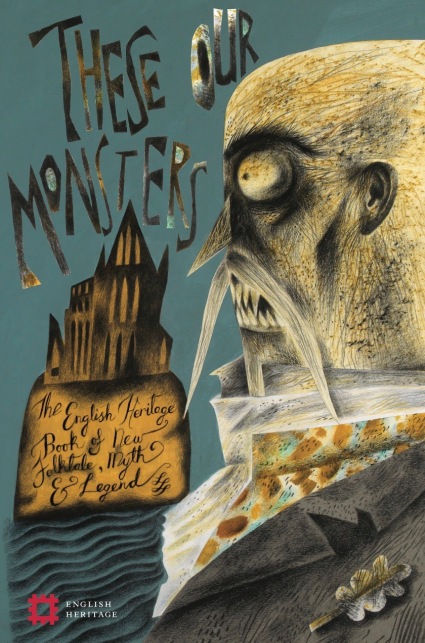 Below: wrap around dust-jacket in a storm of my trademark oak leaves. 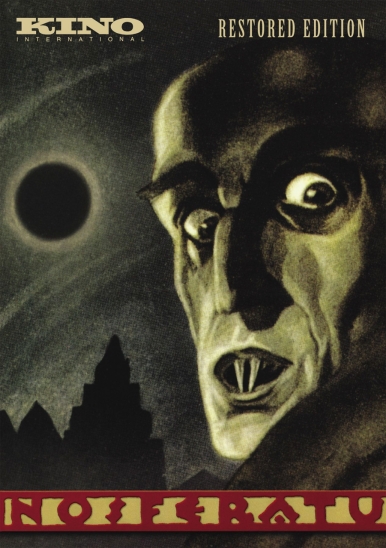 It’s no secret how much I admire the work of the German film director, F. W. Murnau (1888 – 1931). The great cinema historian Lotte Eisner’s 1964 account of his work, life and death, Murnau, is among the books permanently on my bedside table. I’ve given up counting how many times I’ve read it.

Nosferatu: a symphony of horrors (1922) is a film that’s been embedded in my psyche for so long that I can’t remember a time when it hasn’t been an essential part of my creative resources. As a young choreographer and later a director and stage designer, the films of Murnau were a constant and steady influence on my work, and that continued when I became an artist. It’s not even a question of compositional borrowing – as Murnau himself freely plundered the works of the painter Caspar David Friedrich to fuel his cinematic visions – but more a case of carrying a tune in my head, as if Murnau wrote the music that I move to.

Murnau and his producer Albin Grau got caught out in the act of theft when Grau’s production company lost the case brought against it by the widow of Bram Stoker for infringement of copyright, Nosferatu‘s plot having been all too obviously lifted from her late husband’s vampire novel, Dracula. First she demanded recompense, and when it became clear that the film, which had not been financially successful for its producer, was not to be milked for cash, then she embarked on a mission to have all copies of it destroyed, a goal that she would have accomplished had a very few not escaped her reach. (She had just sold the rights of the novel to Universal Pictures, who were about to film it with Bela Lugosi in the title role, and she was driven in her determination to wipe Nosferatu off the face of the earth so that it wouldn’t become any impediment to the deal.)

From the beginning of the Hansel & Gretel project, when I was making the illustrations for the Random Spectacular picturebook of the fairytale, I had Nosferatu in the back of my mind. The vampire Count Orlock’s appearance was conceived by the film’s producer/designer Grau, who had founded his production company with the express purpose of making a film of Dracula, albeit without permission from the author’s estate. There seems to be no record of who created and applied the Orlock make-up, and it’s likely that in the custom of that time, Max Schreck, an experienced stage actor, would have been responsible for his own, though with a lot of input from Grau and Murnau.

My Hansel & Gretel witch, with her pate rendered skull-like by a close-fitting cap, and with her hawkish profile, slender fangs and extended, taloned fingers, riffed on Max Schreck’s appearance in the film. First in the book, and latterly in the stage production, her look was rooted in his. 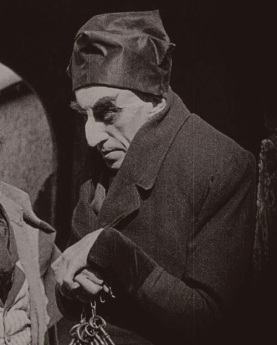 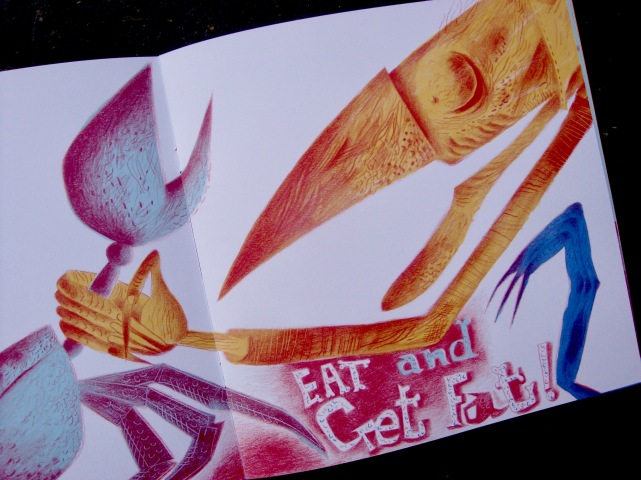 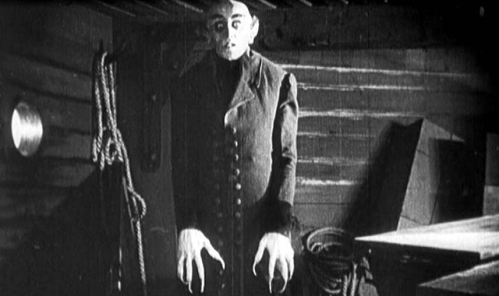 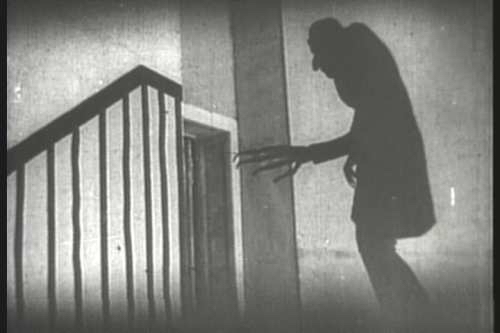 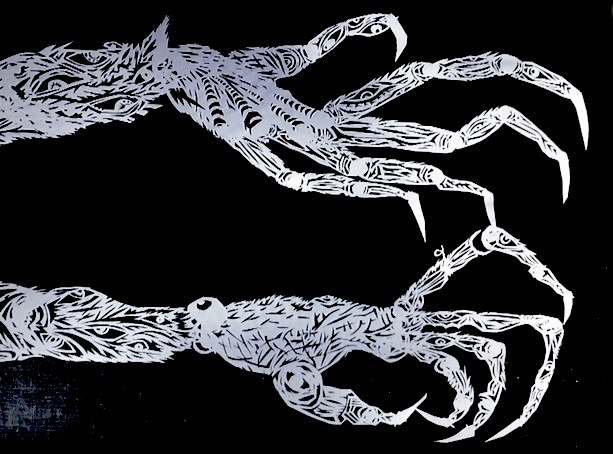 The landscapes of the stage production were also influenced by the film. The slow pans of the forest I used in the projected sequences, were inspired by both the pine forests of Murnau’s locations and the way he used the camera to shoot them. (There’s one particular – and beautiful – landscape camera pan in Nosferatu, that has a slight juddering quality that looks almost like stop-motion, and I borrowed the effect for several of the filmed Hansel & Gretel scenes.) 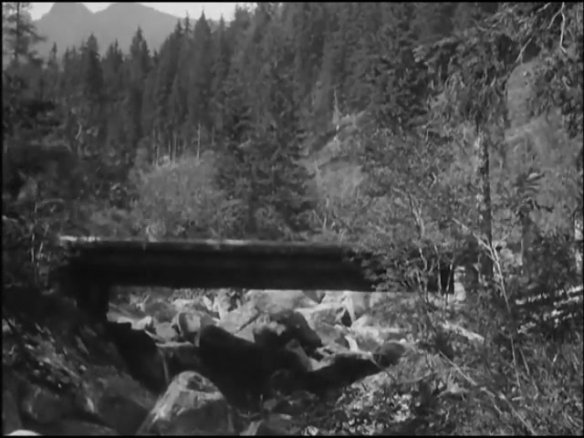 The opening shot of the film foregrounds a tower, and I nodded to it in the building-blocks of Hansel & Gretel‘s toy-box. 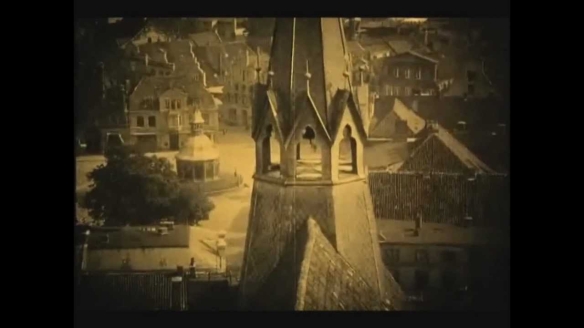 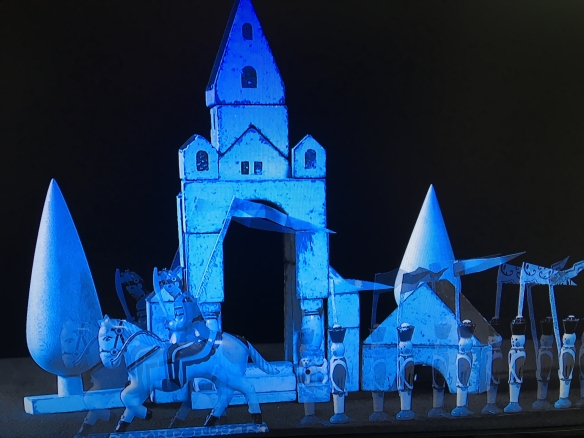 A detail I’ve always liked in the film is the hyena sequence Murnau was at pains to get, using footage he shot of a zoo specimen to illustrate a reference in the intertitles to werewolves. Although I didn’t make use of a hyena in my stage version of Hansel & Gretel, Simon Armitage made reference to one in his text, using the animal as a metaphor for Hansel’s unending hunger. That was all the encouragement I needed, and my ‘homage’ to Murnau’s werewolf ‘stand-in’ has found its place in the forthcoming published edition of the libretto. 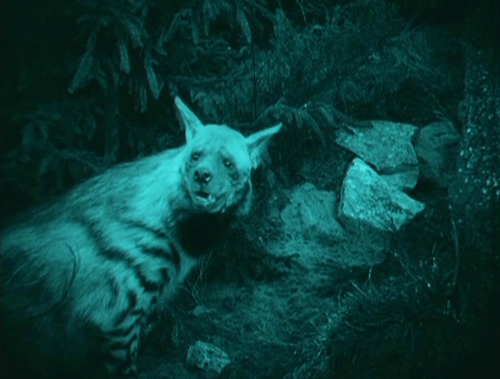 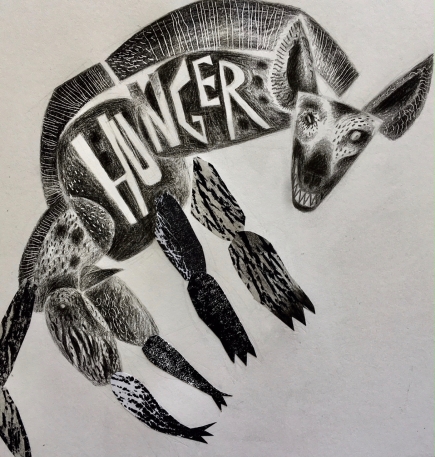 Probably the strangest and most sinister scene in the stage production of Hansel & Gretel, is the one I reserved to capture imagery closest in style to the shadow world of Nosferatu. Using the specially painted and furnished doll’s house I provided for the scene, cameraman, Pete Telfer eerily – though beautifully – lit the model and then created a combination of unnervingly jerky zooms and insidiously gliding panning shots of its interior. The resulting shadowry is pure ‘Nosferatu’. 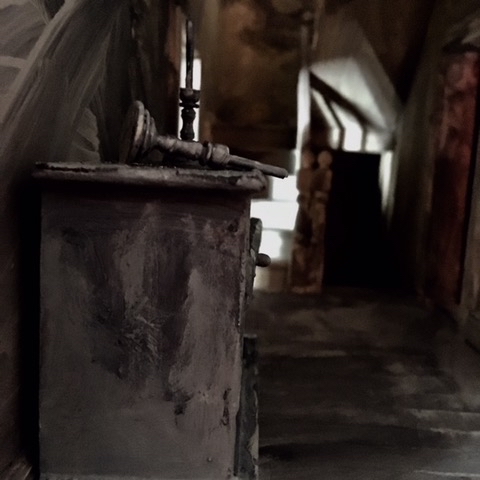 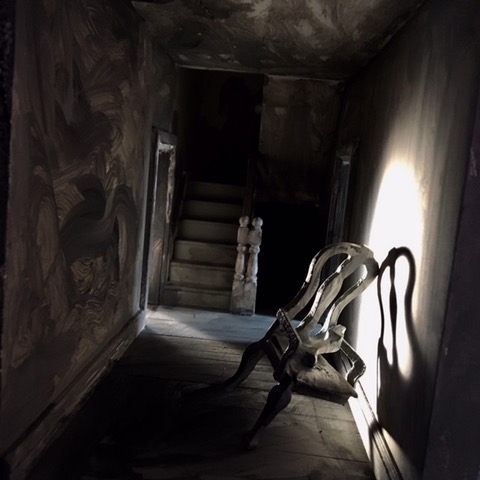 To complete the homage to my satisfaction, I added a coffin-like chest as the sole item of furniture in one of the doll’s house rooms, to reference the coffin-in-the-cellar where Count Orlock sleeps away the daylight hours 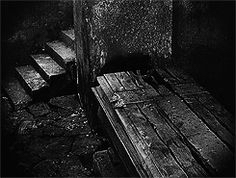 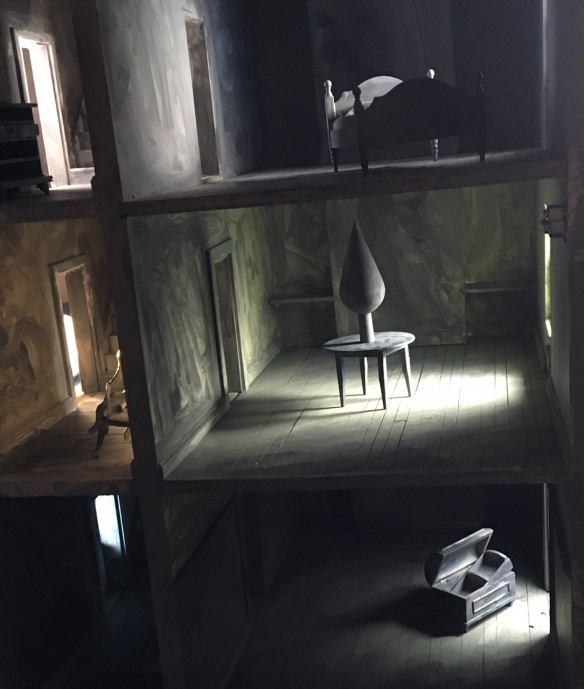 Of course, no-one in the audience is actually supposed to notice these references to a film most of them won’t even have seen, let alone recognise as being building blocks in my own work. The imagery of Hansel & Gretel is what it is because of the way I assembled the visual aesthetic of the stage production. Everything in it is seen from the children’s perspective, from the clockwork tin chickens that peck at the breadcrumbs Hansel lays as a trail home, to the vintage building blocks and brightly painted toy soldiers that stand in for the chaos of war all around. Everything visual in the production was chosen to support Matthew Kaner’s music and Simon Armitage’s text. The rest is my private game, though one that helped me quarry the character of the piece.

While Nosferatu laid out an iconography of images that film-makers and creatives have drawn on ever since, none have yet matched, or even come close to matching the miasma of dread in which the director drenched his subject matter. That has proved unique and consistently impossible to reproduce. Nosferatu continues to guard its mysteries, and all we can do is take the time to look and wonder at its achievements. There are so many moments in it that I love, though my favourite is unchanging. Borrowing from Bram Stoker’s plot device of transporting his undead Count as ‘cargo’ in the hold of a vessel, Murnau offers the unforgettable sight of the ‘death ship’ transporting Orlock gliding swiftly and silently into Bremen to disgorge its deadly plague of vampire and rats, and for me it’s the most beautiful and potent moment in the history of early cinema.

Vampires can’t beget children, at least not in the orthodox way. Nevertheless, Hansel & Gretel grew out of the fantastic tone poem of Murnau’s film, and that makes them, to a very great extent, Nosferatu’s children.