27th May, 2017, 19:30H. The space is packed. Under the great dome of the wooden ceiling there’s restlessness and anticipation from the audience. Everyone has been waiting for this performance. Director of the festival, Daniel Broncano, has played his cards close to his chest. I haven’t seen the projections of my paintings on these rough stone walls. I don’t know how he’s fitted the images to the music or what the scale of them will be. The musicians of Trio Rodin walk out onto the stage. Jorge Menotti on piano, Carles Puig on violin and Esther Garcia on cello. Daniel joins them with his clarinet. They begin.

I’ve grown to know the music well during the weeks spent making the paintings, yet in this space, it springs surprise after surprise on me. There are things I’d missed completely in the recording I’d used. Here in the Iglesia de los Jesuitas the players are transformed. Jorge at the piano is ablaze. He’s at the back of the platform and when his head darts round to watch his companions, the speed is almost shocking, less a man than a predatory bird. Esther’s face, thrown back into the light becomes the pale mask of a seer. She curves into her instrument, embracing and becoming one with it. Carles is as ramrod straight as a Renaissance prince, fierce and commanding. The dramatic spectacle of the playing is mesmerising. There’s a moment when Daniel wrings a passage from his clarinet that has me trying to align my breathing to his. I can’t. I don’t know what his lungs are made, from but mine are not made from the same stuff! The experience of both the music and the musicians playing it, is visceral, exhausting, exhilarating.

The images of my paintings above, are huge and vivid in the darkness, their surfaces textured by the rough stone. All is well. Everything works. The paintings become meditations between the black and white photographs of the Stalag VIII-A prisoner of war camp. Gaunt musicians from the the first performance of Quartet for the End of Time, stare out from the graininess of another world: barbed wire, snow and rows of dark huts. I glance around to see an audience transfixed and transformed by a performance both eerie and life-affirming. I think about my parents and how they would have loved this moment. I imagine them siting here, a few rows away in front, their backs to me, heads inclined together. Younger than I am now, so that the grey-haired son gazes on his youthful progenitors-to-be. I wish they would sense my presence and turn around so that I could see their faces. But onstage the movement draws to a close, the audience stir and settle again and the couple are no longer there. Time, having for a moment folded so that the past pressed against the present, reverts to its more usual, linear trajectory. I am in the moment again, and the long-time-dead have gone. 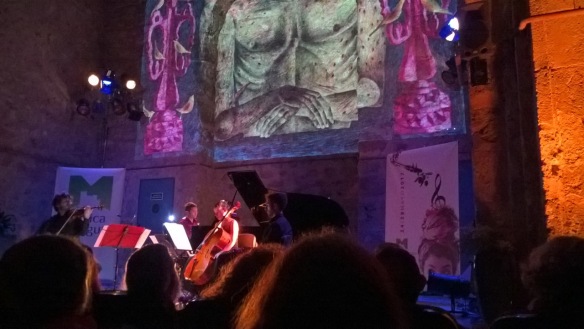 The players are done. There’s a frozen moment of completion, the held breath of a conclusion. Then the long exhalation and the applause. The audience are on their feet. The musicians return from the mountain top. Here at Segura the demand for an encore sometimes comes in the form of a rhythmic ‘Flamenco’ clap that grows out of the applause. But not for this. There is nothing that can extend or follow this performance, and we all know it.