My thanks to Gravitywell, the award-winning digital media company in Bristol, for sharing this example of how my artwork for the English Heritage Myths Map was layered by them to create an interactive experience across diverse platforms. This is just a small corner of the map, but you can experience the full effect by clicking on the link at the bottom of the page.

I produced all the artwork for the map, and the entire project was designed, built and launched by Gravitywell in a six week schedule. There were times when it seemed an almost impossibly short time in which to achieve everything, but we did it!

Since February my working days have been pretty much filled with the Myths Map/Telling Tales project commissioned by English Heritage. My brief was to conceive and create artwork for an interactive map featuring myths, legends and folklore associated with selected E.H. sites. Working closely with Gravitywell, the Bristol-based digital agency charged with building the map, I’ve produced all its assets, including the English Heritage Myths Map logo through which the site is entered (see below), the map outlines, textures and topography, the settlements and the E.H. site icons.

Below: George and the Dragon were built as paper maquettes and then scanned, digitally assembled and animated for the map logo 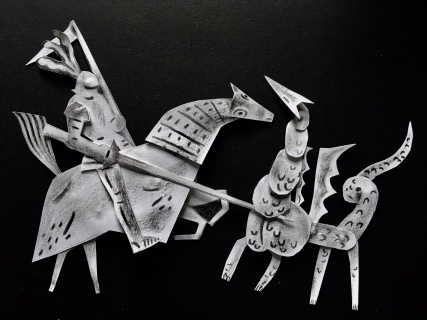 Below: drawn elements used to create the settlements of the Myths Map

Below: some of the many English Heritage site icons I produced for the map

Animated elements for the map and sea surrounding it, were made by me and digitally animated by Gravitywell. There are deer and birds for the land, and assorted sea monsters for coastal zones.

Below: Kraken maquette and ships

Below: in the studio I roughly layered elements to guide the animators 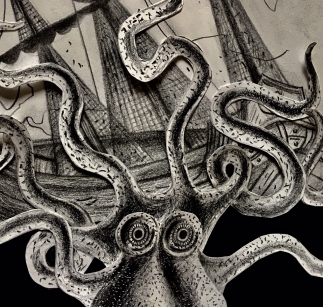 In addition to the map assets, I’m making animation maquettes for use in films being produced by English Heritage about some of the sites and the myths and legends associated with them. The first of these is St Hilda of Whitby, who founded Whitby Abbey and according to legend asked God’s help to clear the site of vipers so the building work could be carried out in safety.

My attachment to the Telling Tales project extends to producing illustrations on the theme of Myths and Legends for English Heritage Magazine throughout the year, the first of which has been Saint George and the Dragon for the Spring edition.

No project of this scale can get to completion without the cooperation and collaboration of many, and the Myths Map teams at English Heritage and Gravitywell were sterling throughout. Enthusiasm and appreciation were boundless at every stage, which made the experience a pleasure even when the hours were long and the ‘to-do’ lists were endless. As an artist much of what I do is solitary, but on Telling Tales the sense of work carried out in partnership with enthusiasts, has been the chief pleasure of the project. I’m so pleased it came my way, and my thanks to those who sought me out to play a part.