My exhibition Dark Movements, made in collaboration with the American poet, Jeffery Beam, ran through the Summer of 2015 at Aberystwyth Arts Centre. The dancer Jordan Morley was tireless in his support for the project, turning himself inside-out and back-to-front to be my model for all the paintings.

Three years on and Jeffrey’s dream to have his poems published, alongside images of the paintings they had accompanied in the exhibition, has come to pass. Tireless encouragement for the project came from Sarah Parvin (aka The Curious One), who has also contributed an essay, and from Jeffery’s close circle of admirers and supporters, among whom Maria Maestre has been a significant moving force for both author and artist. My heartfelt congratulations to Kin Press, who published the book, and to J.C. Mlozanowski, who edited and designed it. I doff my cap to the many who helped bring Spectral Pegasus: Dark Movements to the finishing line, but especially to Stanley. (He knows why!)

And an especially warm thank you to Eve Ropek, whose support of Dark Movements when she was in post as Exhibitions Officer at the Arts Centre, was unflagging, insightful and inspiring throughout.

Poems by Jeffery Beam and artworks by Clive Hicks-Jenkins 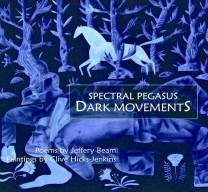 In an event organised by Pen’rallt Books, the poet will be reading from his work at: 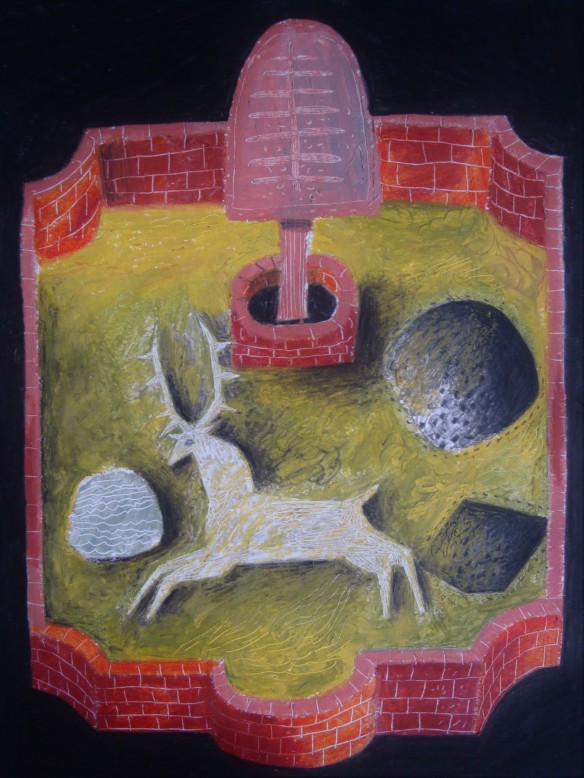 I knew that after collaborating with Johann Rohl on the ‘garden’ for Sarah Parvin’s forthcoming ‘The Curious One’, website, that the spirit of what we made would drive me to further explore the theme. Today I made The Enclosure in oil pastel, the first of a planned set of small garden  images. The iconography devised with Johann…red brick walled-garden, dark flower beds, trees and garden follies… are all about to find their ways into the new work. 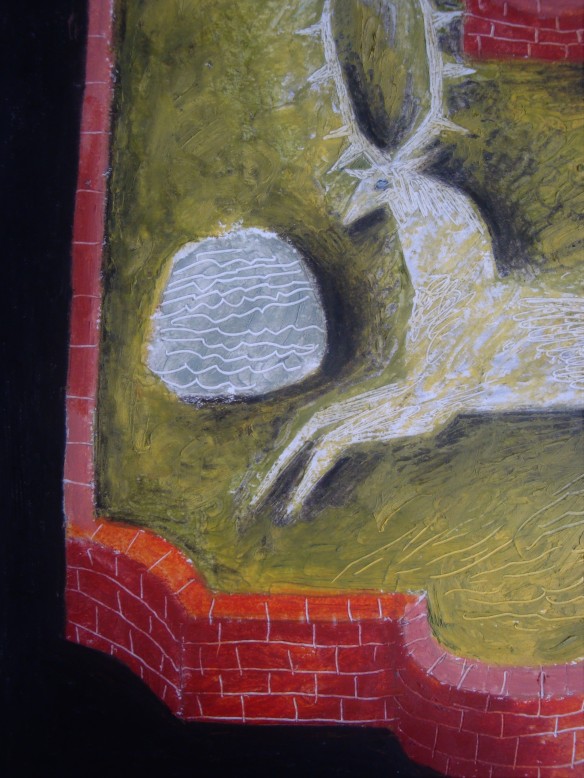 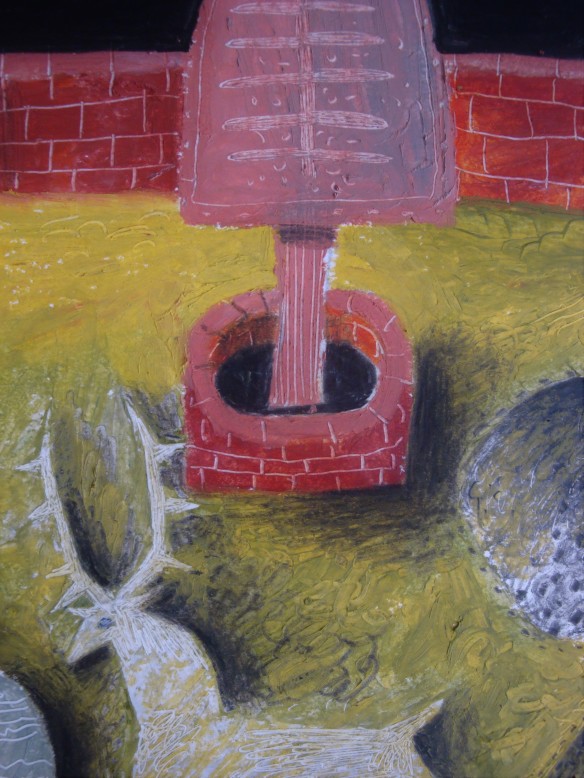 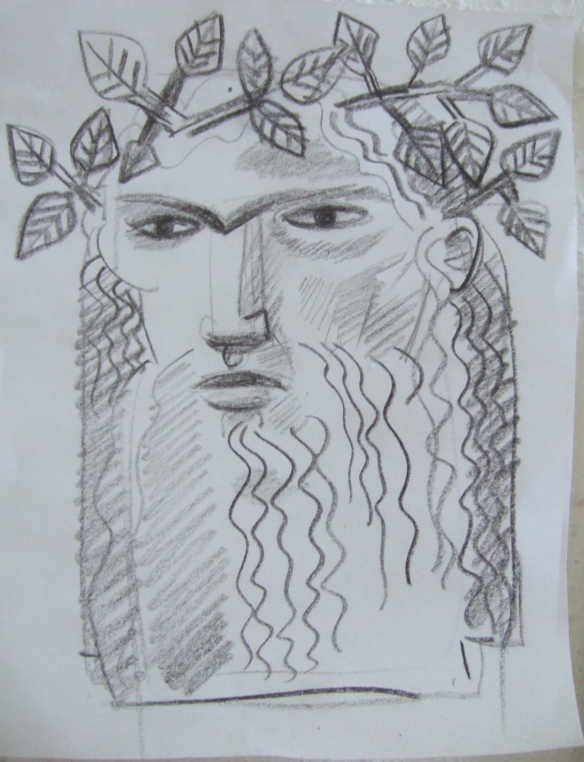 The collaboration between me and Dan Bugg at Penfold Press to produce a series of editioned screen-prints  on the theme of the medieval poem Sir Gawain and the Green Knight, is underway. 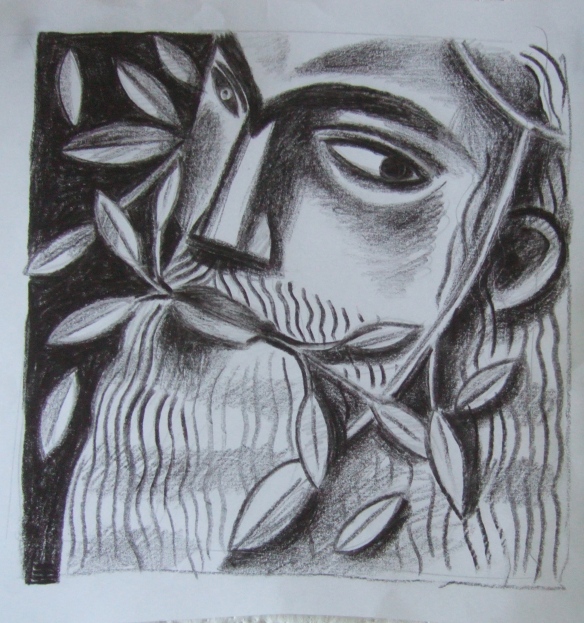 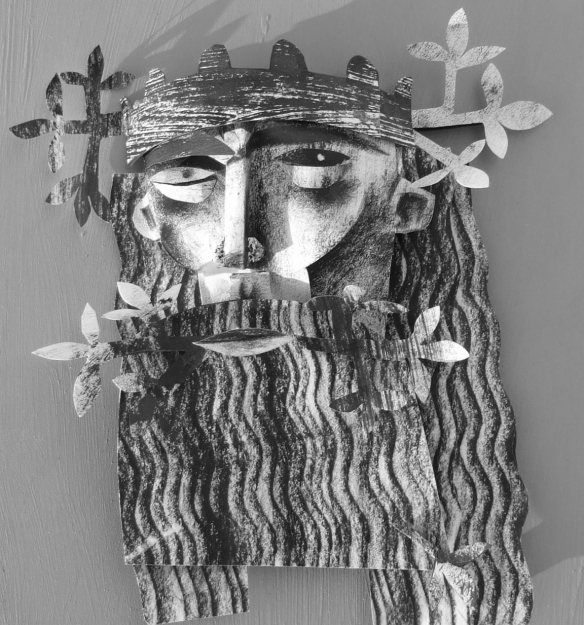 The prints are to be produced and made available for purchase sequentially. I spent some weeks working in detail through Simon Armitage’s 2007 translation/re-working of the poem, making notes and finding the passages that spoke to me in visual terms. While I could happily have made a series of forty images, on the principle that less-is-more, I whittled it down to fourteen. 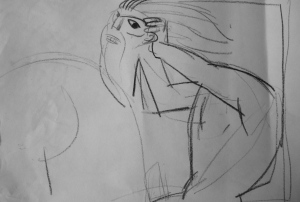 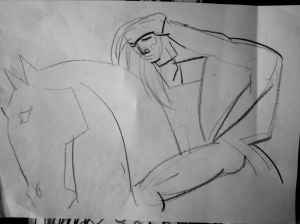 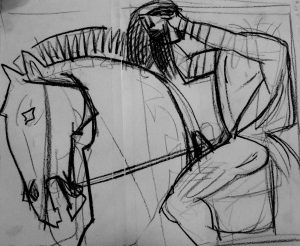 I’ll hold back from sharing with you the aspects I’ll be illustrating because Dan and I want there to be the element of surprise as each new print is editioned and launched. I recently showed the completed list of fourteen titles to Dan and to Sarah Parvin. (Sarah was the moving force behind this project, coming up with the idea and then teaming Dan and me.) With the ‘list’ agreed and signed off by all concerned, I’ve started a workbook to begin building the images.

Dan and I will shortly be producing  Man Slain by a Tiger, a print inspired by Tipu’s Tiger/ The Death of Munrow that we’re using as a dry-run for the Gawain series. After that, the great work will begin.

Preparatory colour sketch for Man Slain by a Tiger 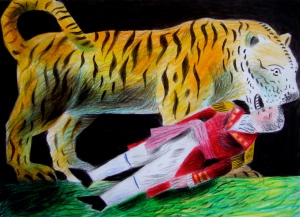 Rendering in lithographic crayon on True-Grain 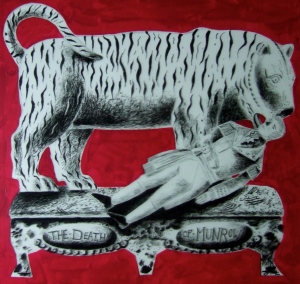 Below: study for Gawain from my notebook for the fourteen prints. 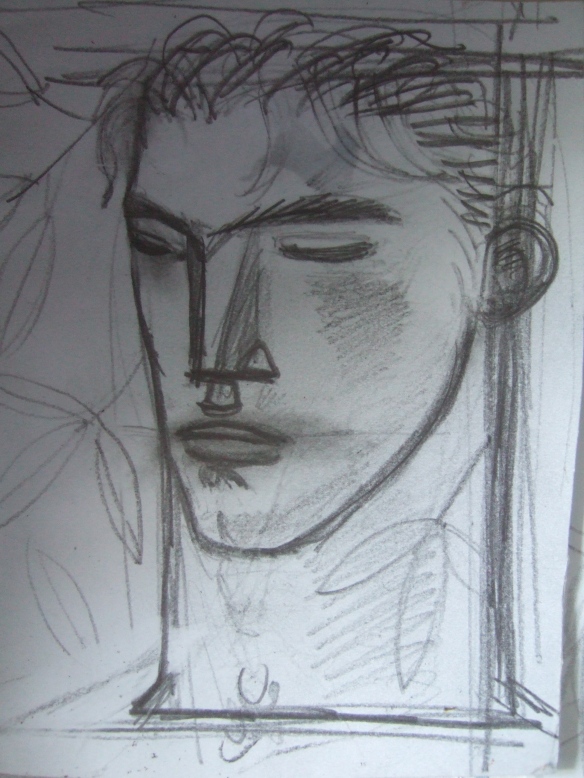 In 2002, when I completed the drawing On the Mountain in the series The Mare’s Tale, I believed it marked the end of my work on the theme of the Mari Lwyd. The series had absorbed me for two years. There had been, in short order, two big exhibitions of the work in Wales, and some of the drawings had thereafter travelled with a mixed exhibition, titled Dreaming Awake, to the Terezín Memorial Gallery in the Czech Republic. The poet Catriona Urquhart and I had collaborated throughout the process of making the drawings, and she wrote a series of poems about my father that became the text of The Mare’s Tale at Newport Museum & Art Gallery in 2001 and an edition for The Old Stile Press which I illustrated. 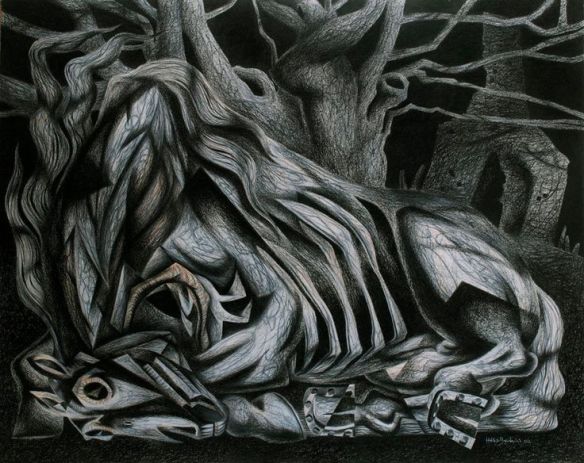 While The Mare’s Tale was an exploration I needed to undertake, its underlying themes were based on distressing events. A point of emotional weariness came at which I realized it was time to bring the series to an end. Catriona Urquhart’s early death in 2005 seemed to me to draw a line under it.

In 2013, the composer Mark Bowden and poet Damian Walford Davies brought new insights to the subject with a chamber-work for ensemble and performer that was inspired by my drawings and by the poems and biographical events. The libretto was conjured as a new fiction to make a dark and glittering psychological ghost story. I designed and directed the production, also titled The Mare’s Tale. It was extraordinary to watch what had started with my drawings, evolve into a performance for an orchestra and a singer/actor. Eric Roberts played the role of Morgan Seyes, drenched in my late father’s terror of the Mari Lwyd. 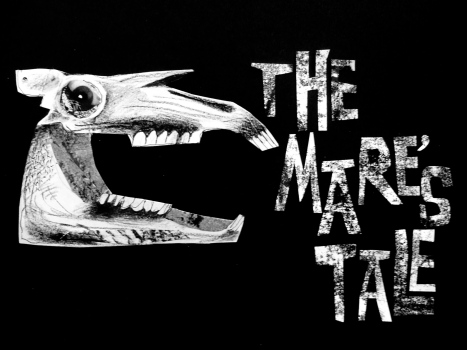 That same year a plan evolved for an exhibition of my Mari Lwyd work at Aberystwyth Arts Centre, borrowing from public and private collections and adding the stage-designs, puppets and maquettes I’d made for the performance. I had no plans at that time to make new artworks. The exhibition would be a retrospective.

I’d been drawing an American dancer, Jordan Morley, intending a small series of paintings of him for a group ‘portrait’ exhibition I’d been asked to participate in at a gallery in Barcelona. Jordan and I were evolving processes of working together – in New York he acted out scenarios I suggested to him in e-mails from Wales, capturing them in series of photographs that he downloaded and sent to me. At some point we talked about the forthcoming Arts Centre Mari Lwyd exhibition and he began to steep himself in all the work that had gone before. Unexpectedly he produced a set of photographs of himself playing on the shapes and forms of the drawings I’d made fifteen years ago. Using those I built maquettes of him and arranged them into compositions. Ideas stirred. A title evolved, Dark Movements. For me, once there is a title, the art follows. 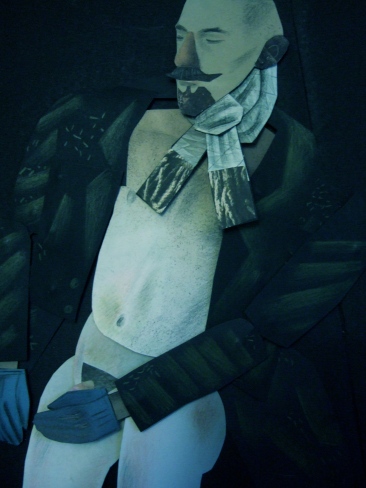 From North Carolina the poet Jeffery Beam watched what was developing. We were already working together on another project, but something in Dark Movements spoke to him, and new poems came as a result of what he saw emerging from my studio. Those poems inspired further paintings from me. Collaborations, when they work well, fly back and forth between the participants with increasing energy.

Interested parties watched and contributed to the process through social media. Maria Maestre in Spain left illuminating comments at my blog that carried painter and poet in some unexpected directions. Composer Peter Byrom-Smith in Yorkshire prepared his score for Jane’s Dream – a ‘visual poem’ edited by Pete Telfer and me from footage of puppets we’d filmed in 2013 – by watching animated segments posted at Facebook. (Jane’s Dream is being screened in the gallery throughout Dark Movements.) Sarah Parvin (aka ‘The Curious One’) curated a Dark Movements board at Pinterest, that presents her own take on how the project has drawn together many threads from my past themes. 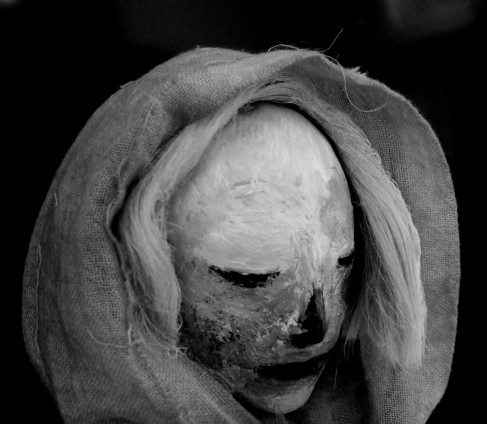 In 2000, my collaboration with Catriona Urquhart took place around kitchen tables, on long walks in the countryside, and occasionally in phone calls when she would read drafts to me. Today the collaborations of Dark Movements have been conducted with social media, e-mails and selfies. I’d set out with no goal other than to visit the grave where I’d left the Mari in that last drawing fifteen years ago, but the habits of ‘making’ can’t be stilled. New collaborations emerge. New words, fresh paints, dancers, puppets and toy theatres kindle a phoenix-flame under the bones, and suddenly the old girl is up and off again, and at a fair old lick. It seems you can’t keep a good horse down, not even after it’s been buried. 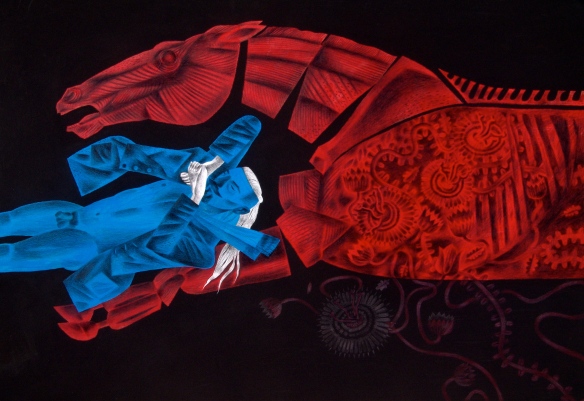