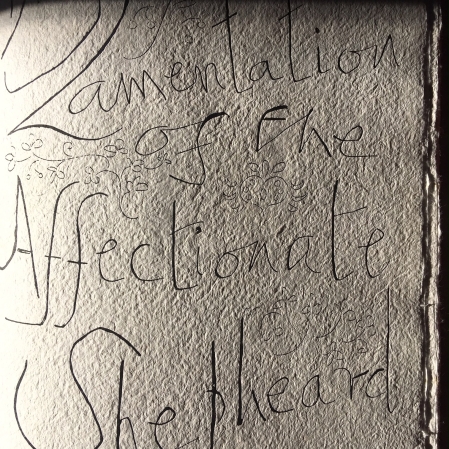 Frances McDowall, who died on Friday morning, has been much on my mind. Twenty years ago Frances played a significant role in bringing the Old Stile Press edition of Richard Barnfield’s The Affectionate Shepherd to fruition. Every time I open my copy of the book Frances is present in it, our work together literally bonded into the pages.

Nicolas McDowall had been taken by examples he’d seen of the printmaking technique known as Heliography, and asked me to produce images for the Barnfield project by those means. He felt the process might be an interesting way to capture much of what he’d been so attracted to in my drawings. As I proceeded with the work I discovered there were endless difficulties that Nicolas hadn’t identified at the outset, and as I struggled to originate drawings by his suggested technique of scratching into emulsion-coated sheets of glass, Frances began the epic task of making the paper for the entire edition of 200 books.

Below: a surviving fragment of a glass plate and the image as it appears in the book. 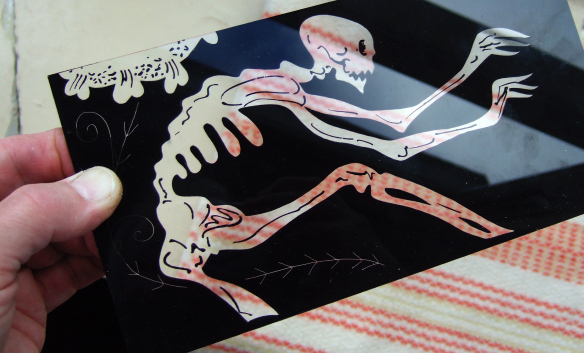 Frances was heroic. It took forever to complete the vast amount of papers required and the processes were painstaking and physically exhausting. Later Nicolas too ran into problems at the press, so it might be fair to say that on The Affectionate Shepherd we all three suffered for our arts. (For a couple of years I was never without elastoplasted fingers because the thin glass plates persistently shattered under the pressure of my styluses. By the end of the project I had broken approximately eight glass plates for every one brought to completion.) 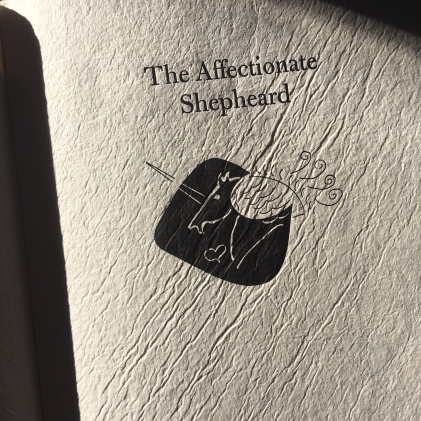 Though the journey was fraught with problems at every stage and it’s a fact that we never again made a book in that particular way, somewhere along the pathways of agonising frustration, wrong turns and undependable techniques, the magic began to happen. Today when I look at the book, Frances’ ravishing sheets, striated and wrinkled and patterned with the marks of the organic ingredients and the drying processes, make a wonderful ground to the meanderings of my lines impressed into their surfaces. In a raking light the marks of my hand and her craft merge into a book the like of which I’ve never seen before or since. Sometimes the ink lines look almost like dark hairs looped and curved and trapped into the paper.

In the colophon at the back of the book, the paper is described thus – perhaps by Nicolas or perhaps by Frances:

“All the paper used in this edition (including the endpapers) was made by Frances McDowall. The furnish used consisted of a mixture of Abaca and Jute, with an admixture of reeds and irises for the endpapers.”

It’s a crisp and matter-of-fact account of a process that was fuelled by energy, passion and the overwhelming imperative by all of us to create something beautiful to frame Barnfield’s poem. Published originally in 1594, the only surviving copy of the first edition of The Affectionate Shepherd available in the UK to view is at the British Library, which is where I went at the outset to examine it. ( I had an alarming encounter there that nearly scuppered the entire enterprise and that you can read about here: https://clivehicksjenkins.wordpress.com/…/…/10/birthday-boy/ )

To my knowledge the Old Stile Press book published in 1998 is the only illustrated edition of the poem. 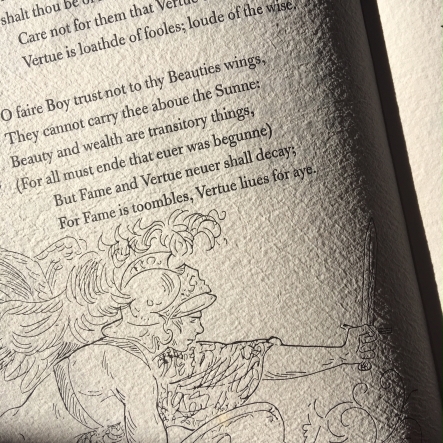 Below: pencil study made in preparation for The Affectionate Shepherd 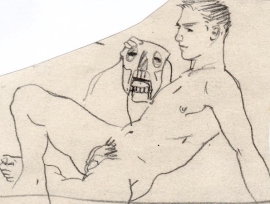 ‘The odds are high in the making of any book: here the choices entailed a far greater than usual amount of experiment and work by the artist, paper-maker and printer. The result of their collaboration is a triumph.’