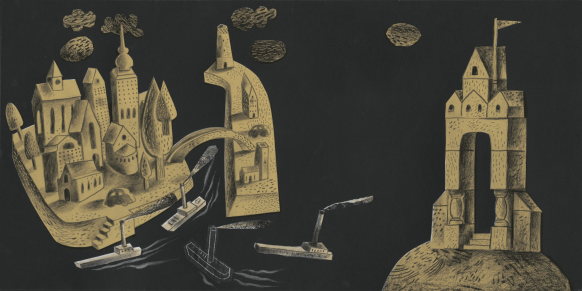 Daisy Wynter wrote to me at Instagram re. Hansel & Gretel:a Nightmare in Eight Scenes:

“I love your work so much, I can’t stop looking at it and the wonderful textures you produce. Is it colour pencil or some kind of printing technique for these images?”

“The drawings were made in black Faber Castell pencil on either paper or lithography film, with occasional use of collaged textures that I produced myself by various means.

I made separate ‘stencils’ in crayons and paints on lithography film for the colours. The layers of drawings and stencils were assembled digitally by the book’s designer Laurence Beck, which is the point at which the colour was added. 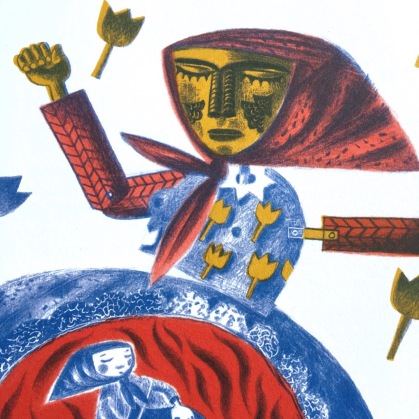 We did it this way so that we could experiment with the colour palette, and this turned out to be a great advantage because along the way we radically changed our ideas to those we’d set out with. 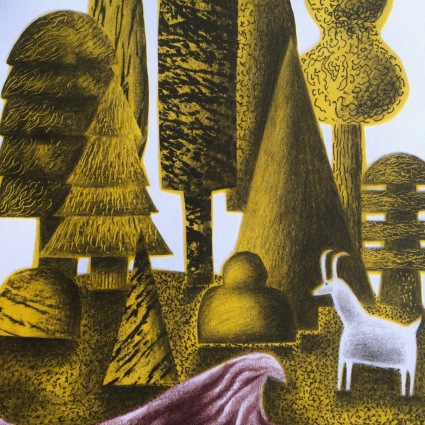 The overall intention was to capture something of the golden age of lithography printing. I’m not keen on illustrations that are essentially photographs of painted artwork reproduced on coated art paper. We planned on uncoated paper and a matt finish throughout the book, and the slight mis-registration that can be one of the delights of lithography and screen printing.

The images and text feel integrated in this way, especially as we added colour to some of the text to denote which characters are speaking.”

Below: several layers of pencil and crayon on lithography film. These were separately scanned and assembled in the computer… 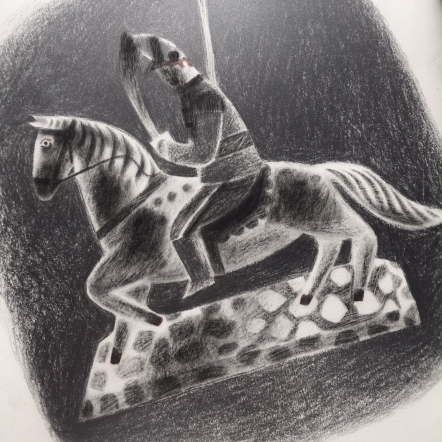 … at which point colour was digitally added. 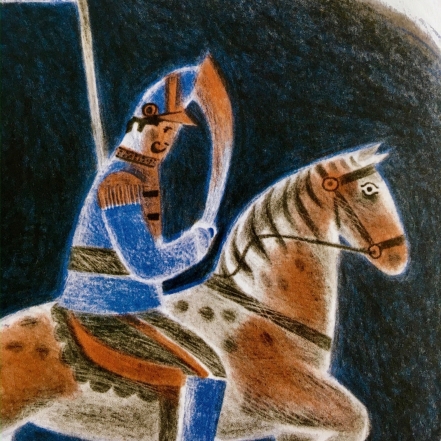 Below: the tailpiece of the book.

In the Grimm brother’s Hansel & Gretel, the children experience in short order, parental abandonment, possible starvation and/or death by exposure, and capture by an apex predator who intends to murder and eat them. When Gretel sees an opportunity to escape, she seizes it, even though it means committing an act of grotesque homicide. So it’s almost inconceivable that at the point she frees Hansel from his cage and the two leave the Witch’s cottage, the place they head for is home, where their troubles originated. But then again, they’re just children, so where else would they go?

Above: vintage illustration of Hansel and Gretel returning to their relieved father.

From the start when I began reacquainting myself with the story, I was bothered by the notion that they’d return to their abusers, the bad mother who hatched the plan to abandon them in the wood and the weak father who’d complied with her. But then there’s that unconvincing aside offered by way of an explanation at the conclusion of the narrative, that the mother has died in the interim. So that’s alright then. The worst of the two has gone, and so with only a formerly henpecked weak man in charge of things, we can assume that everything will be OK, right?

Above: illustration from the book before the colour separations were added.

I never bought that bit about the mother having popped her clogs. It felt like an afterthought. And there’s nothing to indicate that the children could have known she’d died in their absence, so the fact of it can’t have affected their decision to return. Nevertheless, that’s what the Grimms wrote, and as I prepared to edit the story down to what would work in a picture book, I had to come to grips with the fact.

Above: illustration from the book before the colour separations were added.

I went through many stages of attempting to make the issue of the mother’s death feel less tacked-on. Finally, in the book as published, I lodged visual clues that indicate what happened ‘off-stage’ in the children’s absence. It begins elusively at the start of the story, in the illustration of the Bad Mother ordering Hansel and Gretel from the house. All the reader’s attention is on the raw expression of hate on the woman’s face as she hurls the words ‘Get lost!’ at the bewildered children. Simultaneously her husband, almost unnoticed, turns from the event, walking away while carrying the tool of his occupation, a hefty wood-axe. That axe only makes two appearances in the book, and the second one can leave us in no doubt as to what became of the mother in the children’s absence.

Above: early maquettes of the Weak Father and the Bad Mother.

When working with the maquettes that I customarily build to solve compositional issues, I toyed with the possibility of showing more specifically what became of the mother. In the end, I eschewed the explicitness and found a better way to convey the scenario as a mystery. But here, on the Artlog where few will see, are the maquette actors playing out the the mother’s death scene as it isn’t depicted in the book! 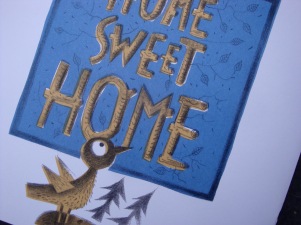 Hansel & Gretel was published in 2016 by Random Spectacular, and is available 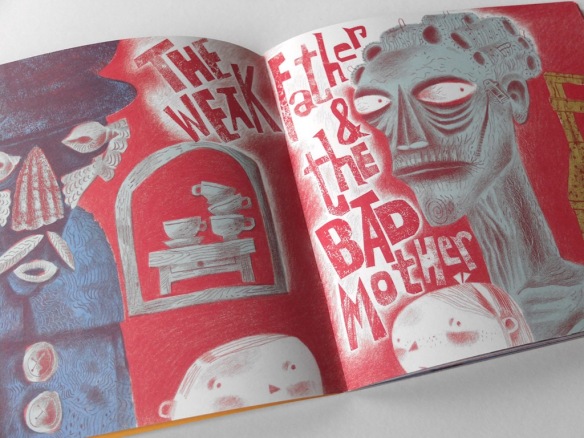 My  book of Hansel & Gretel, published by Random Spectacular, has been beautifully produced under the watchful eye of Simon Lewin at St Jude’s. The scans by Saxon Digital and the printing by Swallowtail, both in Norwich, are perfect. Every etched line and fleck of the original drawings, meticulously reproduced. The book’s six colours plus black have been created as Pantone separations, consistent in colour throughout and printed onto a matt paper that is so much more pleasing for being without the sheen of many illustrated books. The covers are a slightly heavier card than the pages, and the construction of the book cleverly ensures that every double-page spread opens flat, so that no part of any illustration can become lost in or distorted by the ‘gutter’.

There are four, three-leaf fold-out spreads scattered throughout the book, and these took a lot of effort to get right in the early design stages. In the finished book the illustrations across each closed fold-out are perfectly aligned, which can have been no easy task for the printers.

Technically this is just about the most accomplished book I’ve set myself the task of making. I told the story with little recourse to text, and such words as I allowed myself had to be woven through the images as though a part of them. I worked in a technique of colour separation that is relatively new to me. Indeed I was already over halfway through the project when I began learning from Dan Bugg of the Penfold Press the process of producing colour separations.

I am unapologetically proud of this achievement. I have always believed that inexpensiveness should be no impediment to producing a commercial book with all of the attention to detail that might be expected from an expensive private press edition. I love the art of paperback covers – particularly in Czech and Poland – and have collected vintage and contemporary European children’s illustrated books for more than forty years. While Hansel & Gretel is not intended as a children’s book – it’s a tad too dark for that market – it nevertheless honours the traditions of the children’s book illustrators who have given me so much pleasure over a lifetime. I can hardly believe that at sixty-five, I have finally made my first illustrated book!

‘Just amazing. Beautiful, terrifying. What a piece of work. The blues and pinks and whites have the smell and texture of marshmallow, which is fitting. ‘Eat and get fat’ might be the epigraph for the reader, too, who will verily feast.’

‘I pored over your Hansel and Gretel last night – such a wonderful and wicked piece of work. The drawings are at the same time lush and cruel.’