A few days ago I posted images of a contemporary version of the toy town that sits on the hill top in My Dream Farm. Since then I’ve dug out this beautiful toy harbour that Peter played with as a boy, and that his three siblings played with before him. Kiddicraft was founded in 1932, though I haven’t been able to find out when the ‘English Harbour’ was made. I spent an entertaining half hour configuring it in different ways for the photographs. It seems likely that it’s going to find its way into a painting. 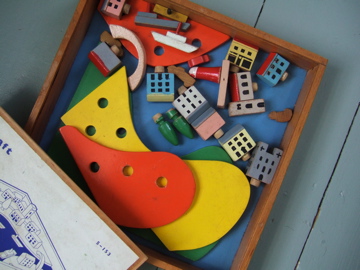 The inside of the box, painted a lovely blue,  makes the base for the toy. 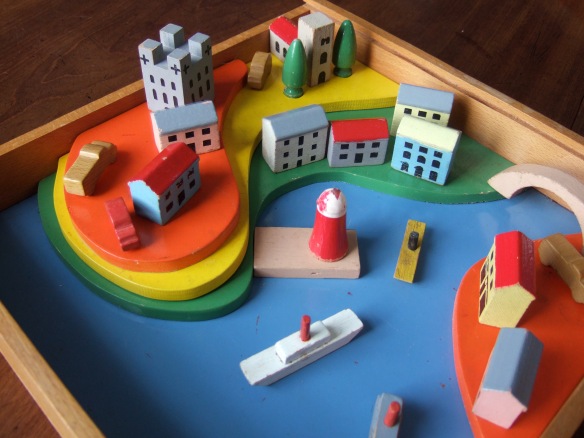 So unlike the machine-made quality-controlled toys of today, the English Harbour carries ample evidence of its hand made manufacture. The component parts are unevenly shaped and vary in size, and the painting of the windows and doors is quite crude. But such is the skill of the design that the whole thing is a delight to behold and a pleasure to handle.
UPDATE:
My thanks to Chas Saunter of the Hilary Page Website for contacting me to explain that the Kiddicraft English Village first appeared in the company’s 1973 catalogue.  In the photograph HERE you can see it’s very similar to the English Harbour that probably appeared the following year. (Chas doesn’t have a 1974 catalogue in order to check.) In the 1973 catalogue there was also a cheaper version of the village, with a jigsaw base and packaged in a cardboard rather than a wooden box. See HERE.
This has been a fascinating distraction for me, and I’m much obliged to Chas for fixing a date on the toy. But now I must get back to the task in question and finish My Dream Farm!