The Russian Bird is a marvel of clockwork ingenuity. Though a little faded from too much sunlight in her youth (we’re more careful with her now) her mechanisms are still strong.

When fully wound she turns her head from side to side, her beak opens and closes, her wings flap, her tail bobs and she sings with considerable brio. Her voice, powered by bellows in her chest, while not the sweetest nonetheless has an impressive vibrato. I always think her more a music-hall artiste than a concert-platform diva. More Vesta Tilley than Dame Kiri te Kanawa!

There’s certainly no point in anyone talking while she’s performing because she drowns out all competition, which is pretty impressive for a lady of her small size and considerable years. 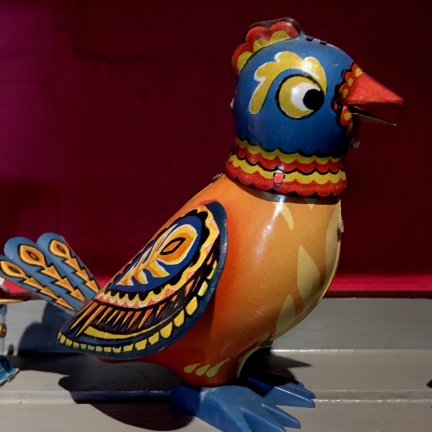 She moved audiences when projected onto a screen during performances of Hansel & Gretel: a Nightmare in Eight Scenes, beautifully accompanying the music that conjured a forest full of birds. Here’s the sequence, though alas without the live music accompaniment. (She was not best pleased that the composer eschewed her voice, but stepped up to the challenge of conveying her role through the medium of mime like a born silent movie star!)

When the poem by Simon Armitage that had been the libretto of the production was published in an illustrated edition by Design for Today, the Russian Bird was awarded a double page spread, and in it she’s quite the Queen of the Forest surrounded by her retinue of smaller birds, all pecking away at Hansel’s path of scattered crumbs.

Deeply conscientious about her duties as artist’s muse, she’s a tireless model and will go to any lengths to facilitate whatever’s required of her in the studio. For her forthcoming appearance on the cover of the picture book Bird House for Design for Today, she carried a Byzantine palace knapsack-style on her back, standing unflinchingly for an entire afternoon while I drew her.

She’s made guest appearances in several galleries and museums. Here at MoMA Machynlleth she takes centre stage on the Benjamin Pollock’s Toyshop Hansel & Gretel Toy Theatre that toured the country in the stage production of Hansel & Gretel: a Nightmare in Eight Scenes in 2018. 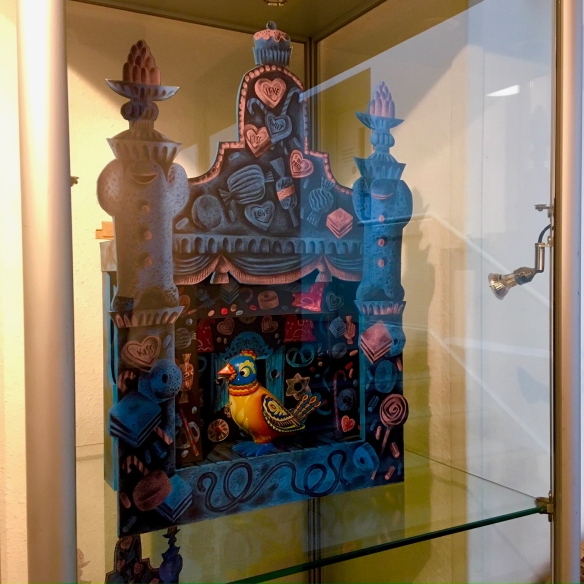 You can see in these snapshots that she loves demonstrating to an adoring public that she’s the inspiration behind what is clearly – in her opinion – the most important illustration in the book of Hansel & Gretel: a Nightmare in Eight Scenes. 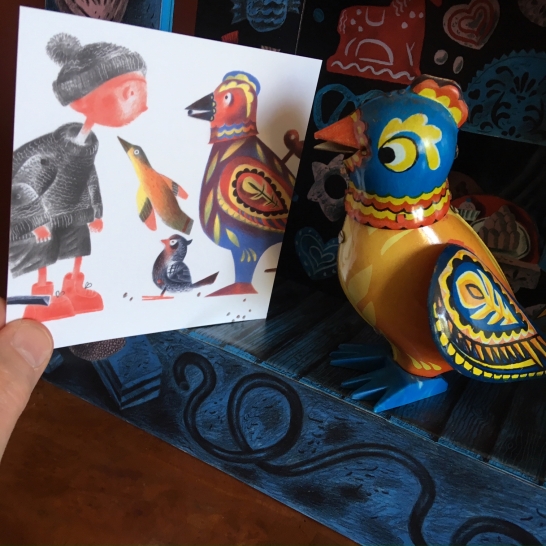 She’s never slow to be my messenger, and friends are always won over by her bright eyes and sprightly demeanour.

Below: in a tiny theatre of her own, produced in a small edition for members of the Benjamin Pollock’s Toyshop Harlequinade Club.

When not making public appearances, Russian Bird is tirelessly creative in the studio, always game to collaborate with other toys on making scenarios she thinks may offer me new pathways to paintings and illustrations. Here she is in a stunning tableau vivant interpretation of Death and the Maiden. 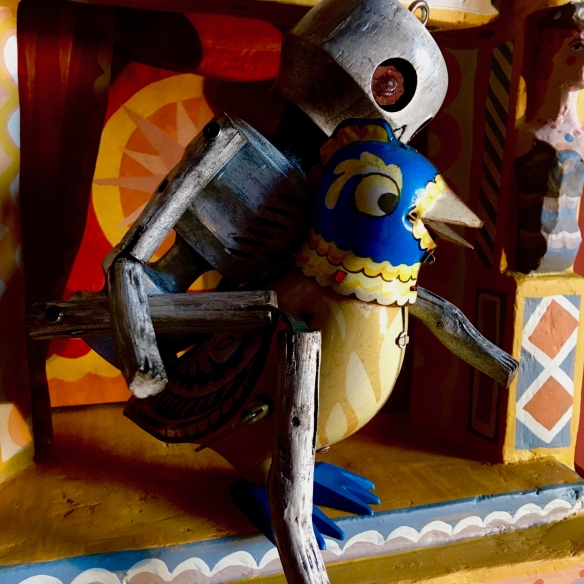 Here we catch her giving one of her renowned masterclasses to an eager young student.

None of us at Ty Isaf knows where we’d be without her. 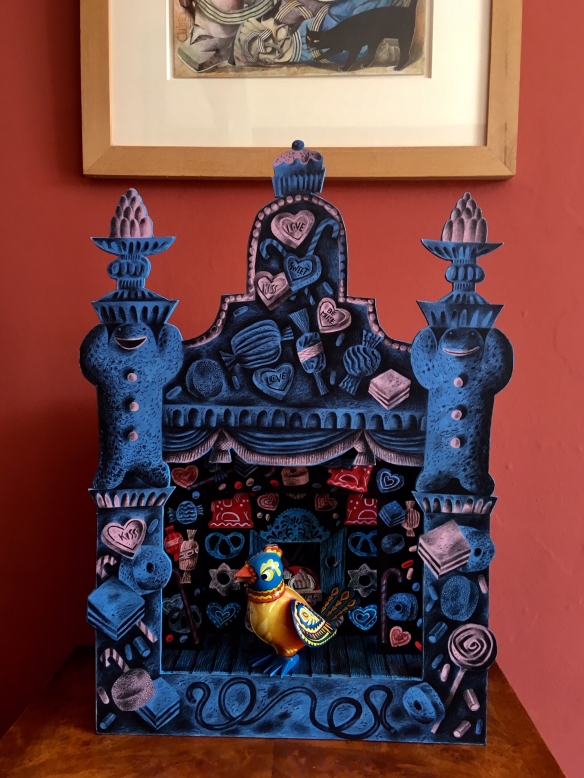