Leonard Greco has been steeping himself in the history and mythology of Meso-America, that is to say the Aztec and Maya cultures of Central America.  His alphabet idea is for a Primer of New Spain.  He said at the outset:

My conceit is a primer of New Spain to be presented to Charles V, I want the frontispiece to be full of that overblown false modesty and groveling  found in  period documents.

In the six months or so since starting on the primer, Leonard has produced nearly half the letters, as well as plenty of other artistic and creative projects, which is impressive by anyone’s standards.  Here are: 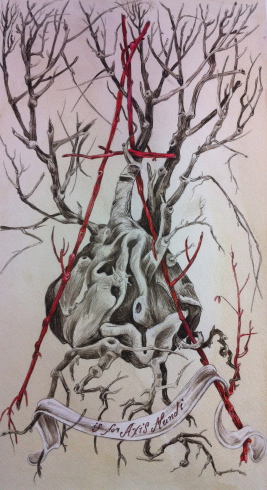 A is for Axis Mundi

B is for Bats

C is for Climate Change

D is for Dogs 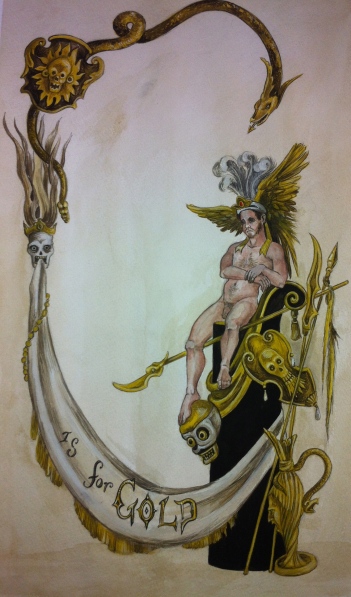 G is for Gold 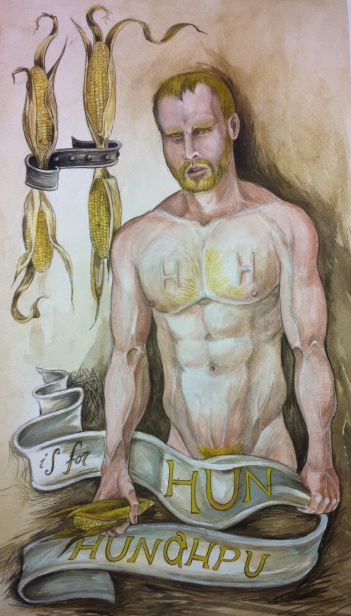 H is for Hun Hunahpu

K is for Kukulcan 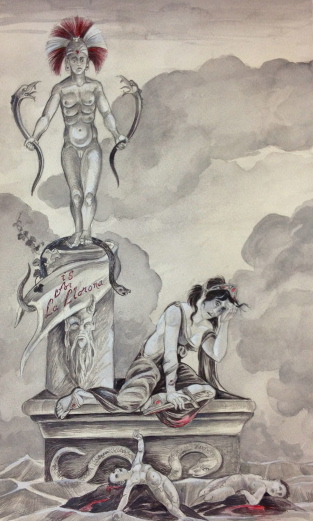 L is for La Llorona

M is forMictlantecuhtli and his lovely bride Mictecacihuatl

N is for New Fire Ceremony

O is for Owls 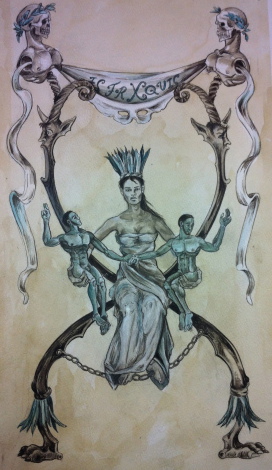 The detail and draughtsmanship of these is remarkable, one can’t really do justice to the content here, but if you don’t already know Leonard’s work, it really is worth visiting his blog and reading the posts that go with them, all of which can be accessed here, tagged ‘Primer of New Spain’. They are rich in information and reflections; there is humour along with the horror, compassion as well as cruelty.  Judging by his output so far, I’d be willing to bet he’ll complete his primer, and it will be something to see!

Glenn Carney blogs at Glennthebrushes, where he periodically posts his chunky, luminous, expressive landscapes largely inspired by South Wales where he lives and works.  A long time  Hellenophile, he opted to represent letters from the Greek alphabet, and somewhat surprised me with this scary collection of faces.

‘Since school days I have loved to doodle repellent, atrophied faces.  They may appear vacant or possessed but, for me, they are fond representations of car crash magnetism, superstars plucked from the underbelly of my imagination!’ 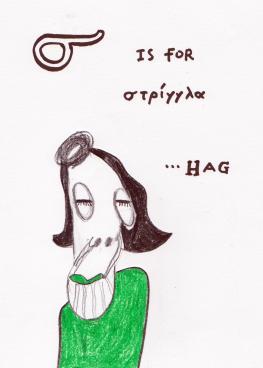 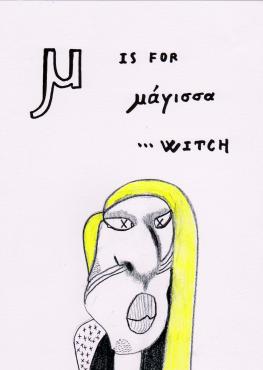 (I’ve not tried to caption these, as it’s hard work with the character map, and Glenn prefers not to try to transcribe them into phonetic English, as that is never exact and, he says  ‘ I’m terrified that a genuine Greek will see it and make a corrosive correctional remark!’)

Well, I hope we won’t have given you nightmares!  Two more alphabet days left to Christmas…